Work has kept me away from the Whiskey Forge recently, but there are some fun writeups in the pipes, including a healthy dose of bitters and an overview of this past weekend’s Tiki Oasis in San Diego. What a blast that was. 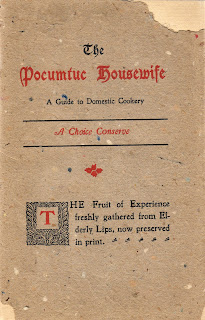 In the meanwhile, I offer Elixir Pro, a boozy recipe that predates America’s commingling of Polynesian idols, rum, and little paper umbrellas. Admittedly, I haven't tried it but offer it as an historical curiosity.

Note that the recipe calls for brandy or "N.E." rum. Given the Connecticut origins of the tattered old pamphlet in my library, this isn't a pun on "any" rum but instead refers to old New England rum, distilled from molasses shipped from sugar-producing Caribbean islands. Of these, Medford rum's reputation reached well beyond the boundaries of its native Massachusetts. For an overview of Medford rum, see Wayne Curtis's And a Bottle of Rum: A History of the World in Ten Cocktails.

Elixir Pro is a useful family medicine for digestive disorders. Pulverize one ounce of saffron, one ounce of Myrrh, one ounce aloes. Steep the myrrh in a half pint of brandy or N. E. rum for four days. Add the saffron and aloes: let it stand in the sunshine or a warm place for a fortnight, shaking it twice a day. Then fill up the bottle with brandy or N. E. rum. The longer it stands the better.

~ The Pocumtuc Housewife, A Domestic Guide to Cookery as it is Practiced in the Connecticut Valley (1906)

Posted by Matthew Rowley at 4:18 PM

Matthew,
I just wanted to say that I enjoyed meeting you at Tiki Oasis at the Bali Hai. I just got around to looking up your sight and I love it. Nice work!

Hey Gwen ~ Thanks. It was great meeting you, too. I don't think I've met a more friendly crowd in some time. And as I think about how to stay cool on this hot, hot day, rum, orgeat, and fruit juices come into play...

Great info thanks, I came across the name Elixir Pro, in the book What Katy Did, so found this interesting and helpful. Thank you ;-)

It's not a sure thing that this Elixir Pro and the one in the book are one and the same, but they date from about the same time and Sarah Chauncey Woolsey — the book's author who wrote under the name Susan Coolidge — spent her childhood in Connecticut, so it way be exactly what she meant. Good eye.