Two bottles of raspberry syrup are in the fridge and all I think of is liquor and Joe Satan. 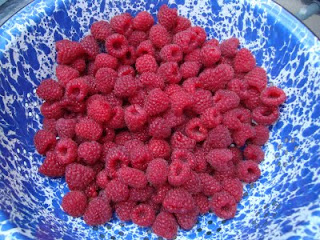 Haven’t laid eyes on Joe in twenty years, but he was a regular at the Kansas City home of my friend Pete Helmkamp. Pete played metal and breathed fire on stage. Still does, but I'm not sure about the fire-breathing part. Joe appreciated that. No idea what his last name really was—just Joe Satan. Nice enough guy, but he had a habit of making one-word proclamations. While some metal aficionados might raise their fore- and small fingers to proclaim “Metal!” Joe would declare the initial letter and pronounce the remainder of the word. “Capital M!” he might throw down, then follow it sotto voce with “Lowercase etal.” Or, on returning from a beer run, announce to the living room crowd “Capital B! Lowercase eer.” 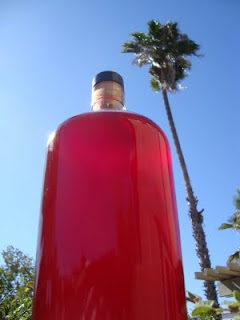 As I regard these corked bourbon bottles filled with fresh raspberry syrup, I can’t help but think to myself “Capital M. Lowercase oron.”

Not because the syrup’s bad. Far from it: Because it’s so good. For years, I’ve avoided 19th- and early 20th-century cocktails such as the Knickerbocker that called for raspberry syrup. Expensive, fey, pain-to-make syrup—who needs it?

But with raspberries on sale this week, I broke down and got a flat. Expensive? Nope: a lot cheaper than buying the stuff at a gourmet shop. Pain to make? Barely more difficult than opening a beer. Fey? Meh ~ that was just me hunting for excuses not to make it.

I suppose you could drizzle it over pancakes, ice cream, or poached peaches, but it’s particularly good with rum. As I said: lowercase oron.

Old recipes for raspberry syrup are all over the board with proportions of fruit to syrup and even sugar to water in the syrups. Jerry Thomas (The Bartender's Guide, 1862) even insists that the fruit mash ferment for about three days to prevent it from jelling before adding sugar. I went with a 2:1 syrup, knowing the water in the berries' cells would dilute the final concentration somewhat and I didn't want to start any spontaneous fermentations. Thomas' recipe follows my own.

Gently wash the berries under running water in a colander, taking care not to crush them. While they are draining, pour the sugar then the water in a pan. Heat the sugar and water, stirring frequently, over high flame until the sugar dissolves.

While the syrup is heating, transfer the berries to a bowl (about 4-6 quart capacity) and mash with a potato masher or the back of a spoon, being careful not to splash. Once the sugar is completely dissolved, pour it over the mashed berries.

Cover the bowl with plastic wrap and allow it to cool. Refrigerate and, after 24 hours, strain, first through a metal strainer, then (if you want to remove even finer particulates) cotton or cheesecloth. Using a funnel, pour the final strained syrup into two 750ml bottles.

And from his classic 1862 The Bartender's Guide; or How to Mix Drinks; or The Bon-Vivant's Companion, here is

Select the fruit, either white or red. Having picked them over, mash them in a pan, which put in a warm place until fermentation has commenced. Let it stand for about three days. All mucilaginous fruits require this, or else they would jelly when bottled. Now filter the juice through a close flannel bag, or blotting-paper, and add sugar in the proportion mentioned above; this had better be powdered. Place the syrup on the fire, and as it heats skim it carefully, but don't let it boil; or you may mix in a glass vessel or earthenware jar, and place in a pan of water on the fire. This is a very clean way, and prevents the sides crusting and burning. When dissolved to the 'little pearl' (see No. 12) take it off; strain through a cloth; bottle when cold; cover with tissue-paper dipped in brandy and tie down with a bladder.

This is when you separate the thumb and finger, and the fine thread reaches, without breaking, from one to the other.

And the prize goes to Mr. Clarke.

You, sir, nailed the drink of the night. I've got black beans cooking and there will be grilled chicken and rice. But before any of that, a brace of Clover Clubs. We're awash in gin: any brand recommendations?