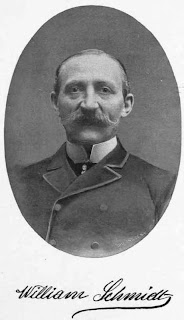 William “The Only William” Schmidt stands out among early bartenders not merely for his huge moustache, but for his occasionally voluminous hot air. It’s only fitting, then, that I came across one of his passages in the course of researching passenger air balloons (a side project for the Autumn; liquor’s not involved—yet).

When I pulled Schmidt’s 19th-century bartender’s manual The Flowing Bowl off the shelf, I broke out smiling at his explanation of men's motivation for partaking of the drink:

MEN drink to quench thirst, on account of a drink's effect, to get an appetite, to promote digestion, to enjoy its taste, for curiosity, from habit, because of discouragement, on account of ambition, to forget poverty, to show their riches, because of sickness, because they do not feel well, for the purpose of learning, to dispel sorrow. This one wants to warm himself; that one is overheated and wants to get cool; one has lost in Wall Street; another's shares have gone up; one man's best girl went back on him; another is going to marry the best girl in town; one drinks behind the door; another in a public place. Some men will drink out of pure style; they want to show their diamonds and jewelry, their costly clothes, and mainly their money. But most men will drink because it is “business.”

~ William (The Only William) Schmidt
The Flowing Bowl (1891)
We’ll set aside for the moment the reasons why women drink. Presumably, it has something to do with ice cream since drinks featuring it show up with some regularity in his pages. Of all his reasons, I like this best: men drink for the purpose of learning. I daresay women do the same. Enthusiastic and curious drinkers learn about history, they learn how tastes and ingredients interact, and they learn their own preferences: This one prefers Scotch whisky, that one rum. Sweetness appeals to some as much as it repels others.

By drinking widely and aggressively and by asking questions, we learn not only our tastes, but the tastes of our friends and guests. While I don’t mind a well-made Lemon Drop, for instance, it’s not my go-to drink. I do keep a frozen batch for friends, however, who adore it. And that, perhaps, is the most enjoyable reason why we—men and women alike—drink: to enjoy the companionship of those dear to us.