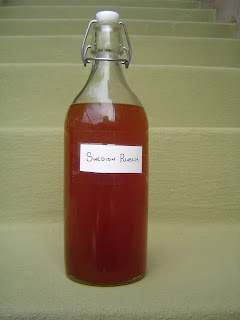 In which Rowley steals a recipe and lays the groundwork for updating an old Shaker classic dessert
(which was posted later that week).
I was skeptical of the boozy tea-and-cardamom flavored liqueur called Swedish punsch (or, punch), mostly because I’m leery of Scandinavian culinary delights such as lutefisk, reindeer, and whale. I shouldn’t have worried. There is aquavit, after all, and a robust home distilling tradition in those frosty northern climes. Plus, I like tea; cardamom can be delicious; and punch usually goes down without a fight.

Final realization? I should have made this long ago.

Given the cardamom and lemon, two flavors that find their way into cookies, pies, and cakes, the recipe also got me thinking about how the spent lemons (used to flavor the spirits) could be incorporated into baking instead of getting pitched once they'd given up their flavor to the punsch.

Now, you could drink this liqueur neat, chilled, but there’s a tradition of using it as a cocktail ingredient that’s a better route. First thing to do (that is, if you can’t find a bottle of the actual stuff) is to score a bottle of Batavia Arrack von Oosten, a Javanese rice-and-sugar cane spirit that is once again available in the US through Haus Alpenz. That will give a noticeable funky character to the final product. Which is good. 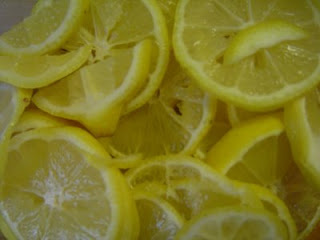 For a recipe using the Arrack—please, the Indonesian stuff, not the eastern Mediterranean anise liqueurs—I turned to Erik Ellestad’s Underhill Lounge. Erik’s recipe makes about three liters; a little much for something I’d never tried to make before, so I scaled the recipe to make one liter.

If I had known how good it would be, how fantastic in mixed drinks, I would have gone for the full three-liter batch.

Put the lemon slices, along with any accumulated juice, into a half-gallon non-reactive container with a sealable lid (e.g., a big ol’ Mason or le Parfait preserving jar). Let macerate six hours. Don’t leave it all day or overnight; you don’t want to extract too much of the bitterness from the 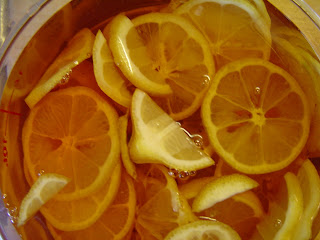 lemon. It is important to slice the lemons as thinly as possible, say no thicker than a credit card (note that I don't follow my advice in the picture; the pie would've been much more tender had I done so).

Meanwhile, prepare the tea syrup (below) and allow it to cool to room temperature. After six hours, pour the arrack/rum infusion off the lemon slices (don’t squeeze them). Set the enhooched lemon slices aside (you may want to use them to make the lemon punsch pie. If not, pitch 'em, compost 'em, or slop the hogs with them).

Pour the flavored rum mix through a funnel into the one-liter bottle containing the tea syrup. Shake gently to mix and set aside at least one day to mellow. 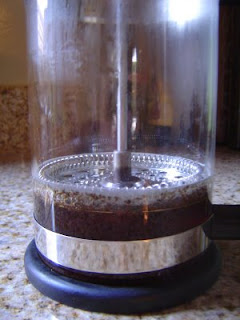 Place the dry loose tea and crushed cardamom pods in French press. Heat a small pot of water to the boil, then measure 250ml. Pour this hot water over the tea and cardamom and steep for six minutes.

While tea is steeping, pour sugar through a funnel into a one-liter bottle.

After six minutes, strain the tea (through a coffee filter or a dampened paper towel or cheesecloth if necessary) into the bottle containing the sugar. Seal the bottle and shake the holy living bejesus out of it until the sugar dissolves completely. 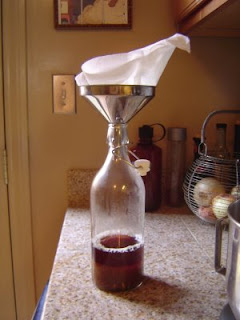 To get you started on some tasty drinks, here’s a trio of recipes that use punsch. Try them all and for more recipes, check out cocktaildb.com.

Shake punsch and juices with ice and strain into a cocktail glass. Garnish with a single drop of bitters.

~ from Jeff Hollinger and Rob Schwartz’s The Art of the Bar: Cocktail’s Inspired by the Classics

And that pie recipe that uses the spent lemons from the arrack/rum infusion? Hold yer horses. It's coming. [edit: now it's posted] 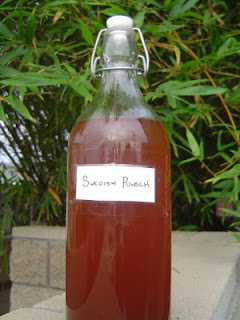 Posted by Matthew Rowley at 1:36 PM

Thanks for posting that! We're making some aquavit right now, but I've been wanting to tackle Swedish Punsch.

And I've made more friends gag by feeding them traditional Swedish food at family events and holidays than is probably fair or right. Nothing like some fish balls in white gravy or pickled herring in ketchup to get the nausea rolling!

It comes with a note that specifically says "Serve chilled with tasty food." So none of that fish.