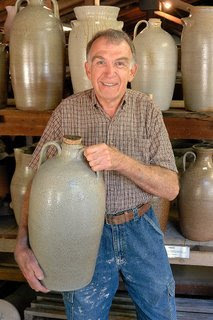 Now and again, some event or person pops up on the radar reminding me that I sometimes miss being back home. Fiercely. I miss the cheap flights to Amsterdam, the fantastic, slow-smoked barbecue, and countless friends east of the Rockies. And…I miss chances to hit Sid Luck’s annual kiln openings.

I met Sid several years back on the trail of moonshine in North Carolina. We talked a lot about pottery while I helped haul and cut wood to fire his partially-underground hedgehog kiln. In the end, I didn’t use his story when talking about Jugtown moonshine containers with the triple-X markings (no, he doesn’t make them) and face jugs (which some in his family do make), but I did end up buying a three-gallon, salt-glazed syrup jug a lot like the one he’s holding in this picture that remains one of my favorite pieces of pottery.

This coming Saturday, August 23rd, Sid is opening his kiln to the public for his huge annual sale. It’s something of a madhouse as buyers scramble for the best pieces—not only his pottery, but that of many other North Carolina potters. If you are anywhere near, get your tail there, buy something, and send me pictures.

If you buy face jugs, pack them carefully and send them to me. Send me one of a monkey wearing a fez and I'll inscribe a copy of my book and ship it off to you post-haste.

About those visages in clay: In the mid-nineteenth century, pottery “face” or “ugly” jugs began showing up in South Carolina. Crudely formed clay faces with wild eyes and protruding teeth made the entire jugs look like tortured, malformed heads. One tradition holds that these grotesqueries were specifically for moonshine or poison. Curious and gullible children would be kept out of the supply through fear that the boogieman would catch them plucking at his jugs. It’s a nice story, but the jugs are so hideously endearing that I can’t help but think moonshine was a secondary concern: the grotesque pottery itself must have been the appeal for many buyers. David Garner, a potter who makes face jugs today, admits African aesthetics may lurk in the origins of face jugs, but thinks early potters made some to relieve the boredom of throwing pot after pot of utilitarian pieces. Like the moonshine that may have inspired them, face jugs are enjoying a resurgence in popularity.

The images here are from Luck’s website, but there are sure to be some for sale this Saturday. 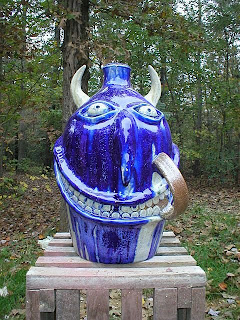