Possum up a Guava Tree 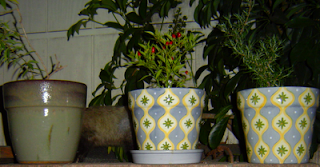 We had an unannounced caller this week. Late one night as I finished work at my desk, I heard a thud followed by scattery, frantic scrambling through our open back door. Leaning back in the chair to get a better view (uncapped pen in hand in case I needed to go all Jason Bourne on an unwelcome guest), I espied a possum, frozen as he regarded me from his precarious perch, his long-nailed little paws clutching at the top of the patio fence. I snapped a few shots of him as he ambled a little more gracefully away, past the rosemary, peppers, and lemon verbena. And then, like a freaky little Keyser Söze, he was gone.

No, not an opossum. Horace Kephart (Camp Cookery, 1910) writes, and I concur: “To call a possum an opossum, outside of a scientific treatise, is an affectation.”

One could marvel in the wonders of nature at such a moment, could take comfort in the knowledge that even in cities, wildlife still flourishes ("why, two of those mischievous little scamps at our old place used to positively gorge themselves on guavas from the trees out back of a summer evening"), or one could, in a soft-hearted moment, realize that, though odd-looking, possums can be almost…cuddly.

Me? I thought of sweet potatoes. See, I’ve lived in a few places where possums may just grace a table or two. Don’t get your backs all up: muskrats are trapped regularly just outside Manhattan…yes, for eating. Not a chance I’d attack a possum with an uncapped pen, though, so I let it slide into the night. 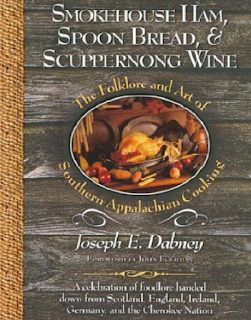 
Mountain people consider the shy possum to be a superb game meat, with a wonderful wild taste, and [it] is often served with sweet potatoes or with chestnuts.

He then goes to describe a few ways of cooking, and notes especially to remove its scent glands before cooking.

Ernest Matthew Mickler, in White Trash Cooking, also notes “There’s only one thing to serve possum with—sweet potatoes.” Since Mickler lifted the supposed white trash recipe from the tony Junior League of Charleston though their recipe book Charleston Receipts, I’ll lift it from him and recommend that you buy both books, perhaps as a bridal shower gift. 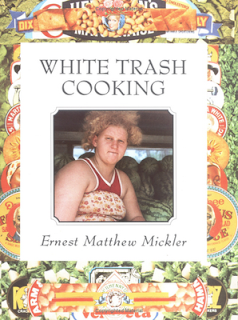 Possum should be cleaned as soon as possible after shooting. It should be hung for 48 hours and is then ready to be skinned and cooked. The meat is light-colored and tender. Excess fat may be removed, but there is no strong flavor or odor contained in the fat.

Rub possum with salt and pepper. Brown onion in fat. Add possum liver and cook until tender. Add breadcrumbs, Worcestershire sauce, egg, salt and water. Mix thoroughly and stuff possum. Truss like a fowl. Put in roasting pan with bacon across back and pour [one] quart of water into the pan. Roast uncovered in a moderate (350 degrees) oven until tender, about 2 1/2 hours. Serve with sweet potatoes.


Oh ~ and since someone’s bound to ask: No, I’m not going to eat him if he comes back. Not when the fridge is stocked with three pounds of bratwurst, a case of beer, several chickens, and enough vegetables to get us through the holiday weekend. It’s too damn hot to roast sweet potatoes or marsupials, anyway. I’m just sayin. You know. If you ever need a possum recipe, there you go.

My father has a recipe for possum (or racoon) with sweet potatoes in the SFA cook book that came out last year. Now no one wants to talk to me about anything else.

Seafood delivery man: "Chef, here are the soft shell crabs you ordered. Sign here, please. Ok, there's something I've been meaning to ask you about possum..."

"I have a large iced coffee with two pumps and room for cream for Bill. Bill, your order is rea...hey, you're that possum guy."

"Sir, the white zone is for loading and unloading passengers only. I'm going to have to ask you to move your...oh, now, hold on one minute!"

I'm amusing myself imagining a world in which nobody wants to talk to you about anything else, Bill ;)