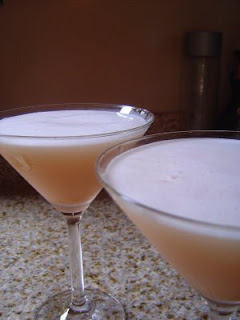 Egg whites in drinks have always skeeved me.
But this is delicious.
~ Dr. Morpheus

Broke a toe today. Maybe two. Meh. The last time I did that, I was playing volleyball. Got a splattery, smashed nose and a black eye in the same match when a buddy spiked my face instead of the ball. But we won. What's a toe compared to victory? Better it should be someone else's toe, but still...

About six years back, relatives (including a judge and a state senator who should have known something about casing the competition) challenged us Rowley kids to a water polo match. I forget whether it was a timeout they called or an outright truce, but the consensus among opposing counsel was never to have all Rowleys on one team, for what my brother-in-law once called Mrs. Rowley's debating squad snatches up gauntlets with glee.

Because blood's been on my mind, I cracked open the shaker and whipped up a cocktail using some blood orange marmalade I put up a few months back. Jamie Boudreau provided the backbone of this recipe with his own Marmalade Sour, but I like this sanguine version. My guess is that you will, too.

Ah, crap. Now I have to find my notes and post the marmalade recipe.

Shake vigorously with ice until the egg white disappears into a soft, billowy foam that mutes the sound of the clinking ice, then strain into a cocktail glass. Quaff it cold.

I doubled the recipe, using only one egg white; it's just fine. No worries that it will be slimy or taste like a farmyard (something I like in cheese, but not necessarily booze). The white provides a smoothly velvet mouthfeel to the thing. You could even swap out some ginger preserves for a portion of the marmalade.

And if your mind works like mine, the answer is yes, Virginia: rye whiskey does stand up well to the sweetness of a marmalade sour.

*There should probably be some sort of disclaimer here that if you're elderly, or an infant, or have a compromised immune system, you should avoid raw egg whites. The truth is, that's not my bag. If you have concerns, consult your physician and read this eGullet thread, but many people I know consume raw eggs with no problems and microbiologists tell me that our fears of salmonella are wildly out of proportion to any real risk.

And if you're an infant reading up on sours, keep my number. I don't usually go for babies at parties, but you're a keeper.