Rum, Blackberries, and the Lash 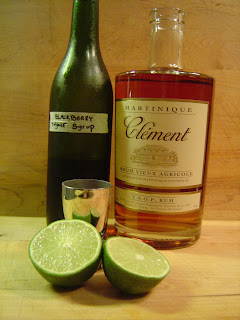 Last week our buddy Dr. Noggin hosted a margarita competition. I like a margarita well enough, but more so when someone else makes it, so it’s not a drink I tend to concoct around the house. Not surprisingly, we didn’t win the grand prize—but the experience did lay the groundwork for a handful of cocktails better suited to using our “secret” ingredient.

With a bag of blackberries in the freezer, some possibilities began to surface. Those seedy little knobs go especially well in drinks—the blackberry julep at Seven Grand in Los Angeles is a winner and even a nonalcoholic lemonade can benefit with a judicious addition of them—but when muddled berries befoul the bottom of the glass, there are only so many seeds I can pick out of my teeth before it becomes obvious what I’m doing. A tequila gargle could fix that, but then I’ve tossed all decorum out the window.

So…A syrup, but a light one, not meant to be kept very long. To give a little extra dimension, some thyme-infused water. An alcohol-based thyme tincture would probably work even better and give more control over the syrup’s final flavor, but this was very last minute, so hot water and dried herb it was.

In the end, the margarita was just ok—came in second place I think—but it turns out I was using it with the wrong spirit. Rum is what’s called for. In particular, I wanted the haunting velvet goodness of Clement’s oak-aged VSOP rum (or, rather, rhum vieux agricole) from Martinique.

VSOP is a designation used by the Bureau National Interprofessionnel du Cognac to mean “Very Superior Old Pale” for a cognac has aged at least four years. The application here makes sense: Clement ages its French-style rhum agricole in both Limousin and American oak barrels, topping off occasionally with rhum from the same vintage because, given the tropical heat, the loss of spirit though the porous barrels runs 8-10% per year. Four years in the barrel equals a lot of lost liquor. Around here, the bottles themselves are prone to losing 8-10% of their volume on any given night.

When we cracked open the VSOP, here’s how it went down:

Shake vigorously with ice until frothy, the drink goes from purple-black to pinkish, and the sound of clinking ice is muted. Strain into a cocktail glass. Repeat as necessary. 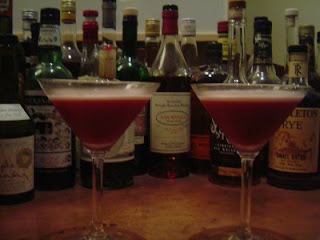 You could bump up the syrup a half an ounce. You could leave out the egg white. You could sink a fancy skewer of three blackberries into the glass or even sugar-frost the rim. But the combination of the very smooth Clement and egg white makes this goes down easy as is with no more garnish than an immediate desire for another.

Scrapping the egg white, and adding a bit of Clement’s rum-based, orange-flavored Creole Shrubb, led us to what I’m calling a

Shake with ice then strain over fresh ice in a rocks glass.

And, here's the recipe for the syrup that ties them together and that could just as easily flavor a fat dollop of whipped cream for a super-quick berry/toasted poundcake dessert. Or breakfast. I'm easy. 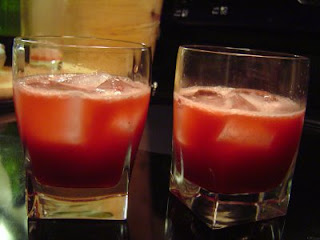 Pour hot water over thyme in a small bowl or cup and let infuse about ten minutes. Put berries in a saucepan, strew with ¼ c sugar, and add thyme-infused water. Bring almost to a simmer and crush berries with a muddler, the back of a spoon, or an immersion blender once they begin to soften. Put on the lid and let the hot slurry sit twenty minutes off the heat.

Strain the warm mixture through stainless steel mesh strainer, pushing through as much liquid as possible with the back of a spoon. Measure the liquid (I got 500 ml) and add the remaining one cup of sugar. Stir until sugar is dissolved. Bottle and refrigerate.