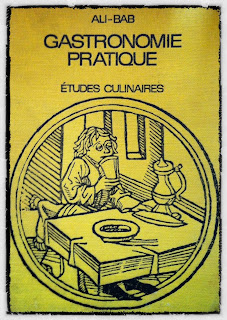 [Edit later that same morning: see Said's answer (a painfully obvious one) to my question in the comments section below. In this case, "fine" Champagne is not sparkling wine, but brandy.]

At nearly 1,300 pages and weighing over six pounds, my copy of Ali-Bab’s Gastronomie Pratique is a beast. Despite the author’s name, it is not a Persian text; it’s French. Ali-Bab was the pseudonym of Henri Babinski (1855-1931), a French mining engineer who was an amateur avid cook as well. His culinary encyclopedia was first published in 1907 with a modest 314 pages, but was expanded over subsequent editions. My beastly edition is the 9th from 1981. Sometime between the presidencies of Theodore Roosevelt and Ronald Reagan, a recipe for truffled rum and Champagne punch — punch truffé — slipped in.

The recipe is problematic and I’m giving it here partly as a curiosity. I use truffles when they are in season, but I’m not as lavish in my use of them as Babinski seems to have been. More to the point, I think the recipe is promising but doesn’t work as written; in particular, the order of adding rum and Champagne seems inverted. My French is self-taught and I’d like someone else to take a run at a translation.

The problem, as I see it, is that a mix of sugar, sparkling wine, and nutmeg won't catch fire. BUT — as anyone who's been around my house for Thanksgiving can attest — a mix of rum, sugar, and nutmeg will, when warmed, catch alight. I think the way to fix this is simply that: change the position of rum and Champagne, then proceed as directed.

Or am I missing something? Here’s the original followed by my translation. Anyone — francophiles, French bartenders, punch enthusiasts — want to have a go at it? [See comments section]

For six to eight people, take:

Put the fine champagne [see comments section], nutmeg, and sugar in a punch bowl, set alight, mix well. When the sugar has dissolved, add the rum and lemon juice; activate the flame. At the same time, cook the truffle in Malaga, remove it, then add the rum mixture to the Malaga and champagne.

Cut the truffle into thin slices, put a slice in each glass punch, and serve hot.

The clue is in the review to which you link:

"On the other hand, he is sometimes also very specific: he differentiates between bon cognac, good quality brandy from anywhere in the Cognac region of France, and fine champagne, brandy made with grapes from the fine champagne sub-region. Some terms he uses are simply out-of-date."

While I did indeed want to resolve this confusing recipe, I'm chagrined that your answer came so quickly on the heels of my query — and that it was at my fingers, Thanks for the clarifications. I'm making amendments to the post right now.