In 1945, the American author William S. Burroughs may have had a dish named after him by the French chef who claimed to have created Crêpes Suzette. Why?

At the time the recipe was written, Burroughs had not yet published any books and had no particular reason for being known outside his circle of friends. There’s a chance Henri Charpentier’s Eggs, William S. Burroughs referred to someone other than the author of Naked Lunch, Junkie, and Cities of the Red Night. But that’s no fun. 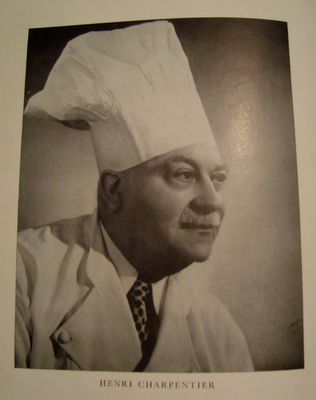 I don’t know for sure how the two may have known each other, but I’ve got the recipe from a privately printed book now in my library, some backstory, and a tenuous connection. Perhaps someone with access to more extensive archives can fill in the gaps in this burning, all-consuming literary mystery.

Henri Charpentier (1880-1961) was once a well-known French chef who worked at the Savoy in London with Escoffier and at several other posh kitchens. His claim to fame was accidentally inventing, so he said, the orange liqueur-spiked dessert Crêpes Suzette while a young assistant in Monte Carlo. Later, he moved to the United States and eventually died in California. Before California, however, he had restaurants in New York and Chicago.

In New York, he worked at Delmonico’s but saved to open his own restaurant—Original Henri Restaurant & Bar—around 1906. For the next three decades, he took a role in several New York restaurants and was a celebrity in his own right. His customers included luminaries, presidents, and foreign heads of state. In 1938, he closed shop and moved to Chicago where he opened Café de Paris. By 1945, he had moved on to Southern California. Eventually he opened a restaurant, of sorts, in Redondo Beach: a single table, in his own home, where the reservation list was so long, it might take a year to secure a seat.

In a nutshell, that’s Charpentier.

So. William S. Burroughs. It’s possible Burroughs ate at one of Charpentier’s places in New York. Burroughs graduated from Harvard in 1936. While he was there, after all, he made trips to New York to explore the city with Richard Stern, a friend from Missouri. Maybe, possibly, there’s a connection there. I’m not feeling it, though.

My gut tells me the connection—if there is one—lies in Chicago. For a few years, in the early 1940’s, Burroughs lived in Chicago while Charpentier ran Café de Paris in the city’s Park Dearborn Hotel. He had a few jobs in Chicago, including a stint as an exterminator, a role that would resonate through his writing for decades. Exterminators don’t make bank, but with an allowance from his well-to-do family, Burroughs probably could afford to eat well. And he was definitely a character: he’d sawn off one of his own fingers in an effort to impress a man with whom he was infatuated. I’m guessing that even in 1943, William S. Burroughs made an impression. 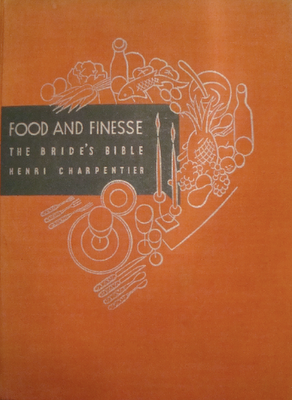 I’m also supposing it was during this time, while Burroughs and Charpentier where both in Chicago, that the French chef caught a wild hare and decided to name a dish after an eccentric customer. Of course, this wouldn’t have been a unique honor. I don’t think ol’ Henri buttered toast without naming it after some American celebrity, friend, hero, or other person he’d want to compliment.

In fact, when Charpentier privately published 1,000 copies of Food and Finesse: The Bride’s Bible for friends and customers, he included hundreds of recipes of the kind Americans once thought were terribly fancy. The recipes read like a Who’s Who of American history: Pheasant, Samuel Morse; Lamb, Grover Cleveland; Cauliflower, Eli Whitney; Peaches Barbara Fritchie, Guinea Hen, Ulysses S. Grant; Brandy Apples, Amelia Earhart. There, on page 426, is the recipe for Eggs, William S. Burroughs.

Other than this single thing, I’ve never seen a reference to Burroughs in Charpentier’s writing. I admit I haven’t read every single thing Burroughs penned, but I don’t recall the chef showing up ever. Dr. Benway, yes; Chef Henri, no.

That’s all I got. If someone can make the connection, please let me know. I’m not exactly losing much sleep over this—any sleep, really—but it would be nice to put this mystery to bed.

Of course, in his mania for naming every dish under the sun for Americans known for one thing or another, Charpentier may have named an egg-and-pasta casserole after William Seward Burroughs (1857–98), inventor of the adding machine and grandfather to the beat author. I’d like to think the historical record’s so sketchy, though, that we’ll just never know. 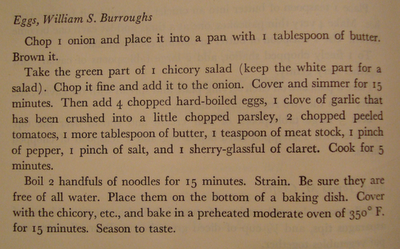 Chop one onion and place it into a pan with 1 tablespoon of butter. Brown it.

Take the green part of 1 chicory salad (keep the white part for a salad). Chop it fine and add it to the onion. Cover and simmer for 15 minutes. Then add 4 chopped hard-boiled eggs, 1 clove of garlic that has been crushed into a little chopped parsley, 2 chopped peeled tomatoes, 1 more tablespoon of butter, 1 teaspoon of meat stock, 1 pinch of pepper, one pinch of salt, and one sherry-glassful of claret. Cook for 5 minutes.

Boil 2 handfuls of noodles for 15 minutes. Strain. Be sure they are free of all water. Place them on the bottom of a baking dish. Cover with the chicory, etc., and bake in a preheated moderate oven of 350°F for 15 minutes. Season to taste.

Goes well with:
Posted by Matthew Rowley at 10:16 PM

I was rocking out on the peculiar notion of Burroughs' Eggs (no way it's an adding machine developer--hope hope). Fully intent upon trying the recipe, I groaned in disappointment at the noodle casserole bit. Think I will have to rework the recipe (with apologies to M. Charpentier). Too redolent of tin-can 1970s--sorry, we all have our preconceptions, right? Perhaps over home-made Alsatian spaetzle instead, or even (blasphemy ahead) over asparagus...Because I just want to be able to present Burroughs' Eggs. Redux. Thanks for sharing this little gem.

Wow! I'll try this. I love Burroughs and eggs. I wonder if they serve this at the Naked Lunch?

My name is Graham Rae and I wrote a piece on William S Burroughs in Chicago for the site celebrating the 50th anniversary of Naked Lunch's publication, www.nakedlunch.org.

Saw your post on the forum of the best William S Burroughs site on the net, www.realitystudio.org, and think you may find my reply below the initial posting interesting. Seems to me like the reference to William S Burroughs probably WAS to the writer and not his grandfather, because of the location of the restaurant and whanot during his stay in Chicago; (French) food for though anyway. Interesting wee trivia snippet.

Graham ~ thanks for the link. Whether the recipe is in honor of the younger or the elder WSB, I'm pretty sure this isn't going to change anyone's understanding of the universe and mankind's place in it — but it's a tantalizing possibility and you've rekindled my interest in it.