The Purpose of Good Liquor

My brother drinks coffee; I drink tea. He and I are two strikingly different men with divergent tastes in everything from politics to pets. He’s nearly a decade older than I and, except for our eyes, our laughs, and general build, there’s no reason to think we are related. Few things to my mind illustrate this more than our tastes in alcohol. 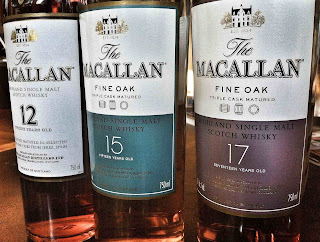 He likes white wines while I prefer reds. He detests gin; I dote on it (and its more aggressive Dutch cousin, genever). I’m a confirmed bourbon drinker, but Scotch is his go-to beverage. The list goes on and on. Somewhere near the bottom of our pro/con t-chart is tequila, the one spirit on which we agree; we like it. A pessimist might conclude that we’re doomed to dislike everything about one another. I prefer to think that when we put our minds to it, there’s nothing we won’t drink.

For his birthday, I sent him my Scotch. Not all of it, by any means, but some choice bottles; a single bottle of big-shouldered, peaty Ardberg and three lovely Macallan bottles: 12-, 15-, and 17-year old. Why? Would I not drink them? Yes, eventually, of course. But he’ll derive so much more pleasure from them than I could — and what, after all, is the purpose of good liquor, if not to share?

If you run into my brother, tell him I like Willett, Van Winkle, and Booker’s.
Posted by Matthew Rowley at 7:21 PM

Was introduced to Booker's by the fine bartenders at Vesper Bar in Las Vegas this week. I liked it very much!

Depending on the shop, it runs $50-80/750ml down here in San Diego. On a trip to Kansas City, I stopped at a Costco en route from the airport to my final destination and found it for $35. Went back the next morning to buy a case, maybe two. Gone. Every single bottle. Manager reported that the distributor learned what they were selling it for and demanded the entire shipment back, so it was packed on a truck during the night and sent off. A pity; I like it very much as well.

Matt, have you ever read Scotch Noob's review of Bookers? http://scotchnoob.com/2012/08/06/bookers-small-batch-bourbon/

I generally disagree with most of his tastes and opinions, but his writing and palate are so sophisticated, that I can't stop reading his new stuff.