The Kingston Club, a Fernet-Laced Cocktail

Your first sip of Fernet Branca, an Italian liqueur,
will be akin to waking up in a foreign country
and finding a crowd of people arguing in agitated, thorny voices
outside your hotel window.
It’s an event that’s at once alarming and slightly thrilling,
and leaves you wanting to know more. 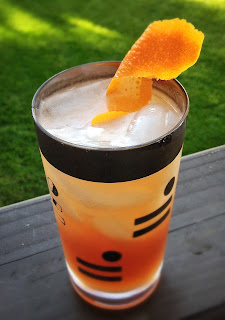 The last time I traveled to Portland, we ate and drank for five solid days. It was, as I've mentioned, glorious. We ate from food trucks, from restaurants, in breweries, at picnic tables — wherever and whenever we spied something that looked good. And, man, it all looked good. To catch our breath, we dropped by bars — sometimes just to shoot a few games of pool, but often to visit a particular bartender. And so I dragged my crew to Clyde Common in the ground floor of the Ace Hotel where bar manager Jeffrey Morgenthaler slakes the thirst of travelers, locals, cocktail enthusiasts, and the occasional insufferable cocktail snob who may get pawned off on a visiting writer.

Fortunately, Morgenthaler isn't such a snob; he's a down to earth, genuinely nice guy who does smart things with drinks. I've got an awful lot of whiskey at home, so, despite the large board bearing an impressive list of supple bourbons and spry ryes, I opted for something tropical after our initial round of Negronis. Bar man Junior Ryan set me up with one of Morgenthaler's concoctions: the Kingston Club cocktail, a peach-colored, lightly fizzy drink based on Drambuie and laced with Fernet, the bitter Italian amaro I once heard a wag call "bartenders' Jagermeister."

A small quantity of Fernet in a tropical drink is unusual, but isn't much of a stretch. After all, tiki bartenders have long used the similarly bitter absinthe-like Herbsaint and Pernod to craft an ethereal, can't-quite-put-my-finger-on-it taste. For you thespians, think of it as the crowd on stage, constantly mumbling "peas and carrots, peas and carrots," helping to set a mood, but not stealing attention from the leads. Drambuie, on the other hand, is a surprise. Best known for starring in the classic Rusty Nail, the Scotch-based liqueur usually plays, at best, a walk-on role in the tiki scene. I'm glad it walked on here.

Shake, top with 1 oz soda water, strain over fresh ice in a collins glass. Garnish with a large orange twist.

Posted by Matthew Rowley at 5:16 PM

I like the glass in the photo. Is that Morse Code on the side? My first thought was 'that isn't right for V, 3 Dots and a Dash'. So I looked up possibilities - EM? AT? Or something else entirely?

Huh. I saw it as a diver just at the beginning of a back flip off a high-dive board. Morse Code may be more fitting, but who can say with these mid-century glassware pieces? Hobo signs, maybe? — "Nice lady lives here. She will make you Chartreuse Swizzles."

Reminds me of the joke: Truffle fries on a menu are like hobo code for rich people - 'you will be safe here'.

But someone should make some '3 Dots and a Dash' glasses for said drink, if they haven't already.