I have licked the inside of a dead man’s skull, yet cannot bring myself to eat brains.

Brains don’t disgust me; it’s not that they are icky, yucky, or gross. After all, I dote on sweetbreads, said to be of similar consistency. No, it’s that, of all an animal’s odd bits, the brain is so clearly the seat of cognition. It’s not for nothing that a German word hammers this point; the brain, the human one, anyway, is das Denkorgan, the “thinking organ.” 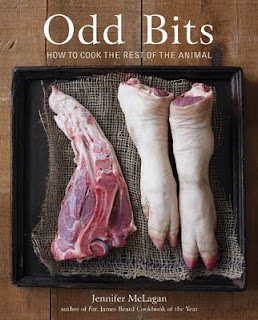 Surely, I have eaten brains, given all the scrapple, brawn, and brei I’ve downed since childhood, but I’ve never actively pursued a hot platter of grey matter. I could chalk up my eschewing brain to mere caution. After all, transmissible encephalopathies such as mad cow disease and other pernicious, degenerative brain disorders, no matter their rarity, can be traced to a heady diet. But the truth is that I hesitate at the idea of devouring thoughts — even a lamb’s.

I’ll eat livers, lungs, trotters, and tongues, but no one — not Fergus Henderson, not Mrs. Beeton, not Charles Ranhoffer of Delmonico’s, or even Escoffier himself — has come as close as has Jennifer McLagan to convincing me that my thoughts about brains ought to be reconsidered.

McLagan’s new book Odd Bits covers brains as well as beef cheeks, liver, tongue, heart, Bath chaps, guanciale, pig ears, haggis, kidneys, sweetbreads, testicles, ribs, lungs, marrow, and more. After writing about the culinary use of bones and fat in two earlier well-received books, her latest subtitle (How to Cook the Rest of the Animal) pretty much sums it up. In this troika of titles, McLagan has firmly established her expertise in converting cast-off bits of mammalian anatomy into tasty dishes. Hair, I suppose, or eyeballs may remain unaddressed, but when she’s covered even toenails, her expertise in offal is unassailable (really, now, what is blood orange calves’ foot jelly but quivering red essence of toenail?).

Continuing hard times and a growing taste for stronger flavors means you’re going to be seeing a lot of what polite company once referred to as "variety meats" on menus. You could do a lot worse than sitting down with Odd Bits and reading up to understand what you’re seeing when you’re out — and how to make some of those toothsome morsels at home.


Frying and the addition of cheese often help persuade people to try something they think they don't like. I serve these as appetizers with drinks—that way guests only have to try one, but I'm pretty sure you won't have any left. The recipe is very straightforward; just make sure the cheeses are very finely grated, a microplane is the ideal tool.

Preheat the oven to 200°F/100°C. Place a baking sheet lined with paper towels in the oven.

In a bowl, whisk the eggs, then slowly whisk in both the cheeses and the chives, orange zest, and salt, and season with pepper.

Slice each brain lobe into ½ -inch/1-cm slices and toss them in the cornstarch to coat. Transfer them to the batter and stir to mix; you will have something resembling a lumpy pancake batter.

Melt the lard in a heavy frying pan over medium heat; you should have about into ½ -inch/1-cm of fat. When hot, drop a little batter into the oil, it should sizzle and rise to the surface. Now add a few spoonfuls of brain batter mixture to the fat; don't overcrowd the pan and adjust the heat so the fritters bubble gently. Cook the fritters about 3 minutes, or until set and golden on the underside. Using a slotted spoon, gently turn them over and cook for about another 3 minutes. As they finish cooking, transfer the fritters to the baking sheet in the oven to keep warm. Serve right away.

The general method for cleaning brains involves removing any remaining skull fragments, then soaking them in a light brine (about 1 teaspoon of salt per cup of cool water) both to draw out blood and to help firm the lobes. After soaking, the membrane is removed and then the cleaned brains often poached in water or stock.

Posted by Matthew Rowley at 7:24 AM