On dark, chilly weekend mornings, I shower, quietly slip on soft old jeans and the frayed (but so comfortable) thick white Oxford I wear only at home, putter around the kitchen, and plan the day’s chores. 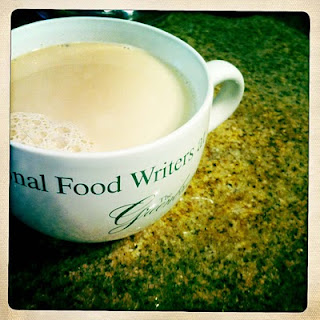 Before hitting the day’s punch list, though, I usually brew an oversized mug of steaming hot masala chai. Masala chai — or, simply, chai or a chai latte in the United States — is an Indian take on hot, spiced tea, almost always tempered with milk. It's enough to hold me over until the rest of the house is up and we tackle a proper breakfast. With a huge cup of it in hand, I’ll mosey out to the front patio, brush the fallen bamboo leaves from my garden chair, and catch up on international news.

Unlike my iced tea recipe, which is fairly set, my chai recipe oscillates between simple and, admittedly, overly complex. Procedures and ingredients shift around to accommodate my moods. Sometimes I dump everything in a pot and just cook the hell out of it. Other times — like this morning — I use a three-step procedure that’s still pretty simple and still just uses one pot.

Depending on what I feel like, I may include fresh ginger, fennel seed, black pepper, a bay leaf, or even vanilla. But I always use cinnamon, cloves, turbinado sugar, black tea, whole milk, and — the core of any good chai for me — cardamom.

Here’s this morning’s batch. It's not nearly as heavily sweetened as commercial concentrates such as Oregon Chai. Want more sugar? Hell, you're an adult. Add more sugar.

Bring the water through cardamom to a boil in a pot. Cover, reduce to a simmer, and let burble away about ten minutes. Add the milk and sugar. Bring almost to a boil, add the tea leaves, then cover and let rest about 3 minutes. Strain. Drink it as hot as you can stand it.