Earlier this month, San Diego lost electricity when a power line from Arizona failed, leaving almost 5 million people without power. Normally, my neighbors are calm, quiet types, but when the flow of electricity just stopped that afternoon, their hooting and hollering sounded as if someone had tossed bags of wolverines and bees in their living rooms. 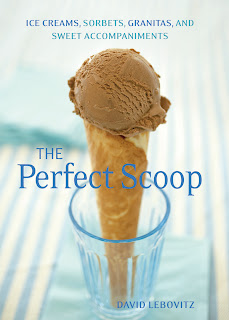 Rumors were rife and nobody seemed to know exactly what had happened. We weren’t sure how long we’d be without power, so we loaded bags of ice in the freezer and avoided opening the refrigerator to eek out as much residual cold as possible.

Hours later and still with no power, we realized that some frozen foods might not make it, so we decided to break out the most ephemeral food in there: a mango/maraschino sorbet.

I’d lifted the recipe almost verbatim from David Lebovitz’s The Perfect Scoop, except that I swapped out the dark rum he called for with slightly larger dose of lower-proof maraschino liqueur. Maraschino — not to be confused with the lurid red maraschino cherries one finds on ice cream sundaes, fruitcakes, and certain Manhattan cocktails — is a clear, aged liqueur made from Marasca cherries. It has an old-world affinity for fruit salads, so mango seemed a good fit.

But we didn’t forget Lebovitz’s original call for rum, so I hauled out a bottle of Coruba, a dark Jamaican rum, for drizzling over the sorbet in our candle-lit living room. I drizzled — at most — a tablespoon over the softening deep yellow sorbet.

The boys had other ideas. They turned their small bowls into drinking vessels by sloshing in several ounces of rum over their scoops. We each squeezed lime over what we had. I had lime-rum sauce on my maraschino/mango sorbet; they had slushy maraschino/mango daiquiris.

Everyone went to bed happy.

Peel the mangoes and cut the flesh away from the pit. Cut the flesh into chunks and put them in a blender with the sugar, water, lime juice, maraschino, and salt. Squeeze the mango pits hard over the blender to extract as much of the pulp and juice as possible. Puree the mixture until smooth. Taste and adjust lime juice or maraschino.

Chill the mixture thoroughly, then freeze in an ice cream maker according to the manufacturer's instructions.