Around New Orleans, respectable bowls of red beans and rice may be had any day of the week. It’s been that way since before my grandparents were born. The combination is so interwoven into the fabric of the city that hometown son Louis Armstrong declared his loyalty to the place by signing off his letters red beans and ricely yours. 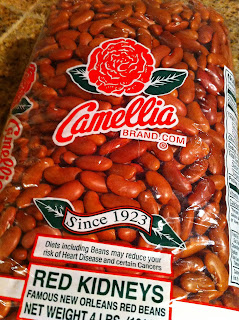 Many aficionados of the local legume maintain that Monday — blue Monday, the old traditional washing day — is the proper day for red beans and rice. With minimal up-front preparation, some spicy meat and almost Spartan seasoning, a pot of beans can bubble away on the stove quietly while housekeepers tend to other household chores.

It’s true that I’ve made red beans on Wednesdays, Fridays, and other heretical times of the week. So bet it. Calendrical orthodoxy is not one of my virtues. But tonight, a large cast iron pot of red beans and another of South Louisiana medium grain rice will grace our table for dinner. There will be sausage and hot sauce as well.

Below are two recipes: one from Camellia, the go-to brand found in nearly every New Orleans grocery store, and one the way I (more or less) do it. More-or-less because I tend to eyeball ingredients rather than measure them in neat teaspoons and ounces, so the taste is always familiar, but rarely exactly the same. I like mine more aggressively seasoned than the company’s recipe, but not so much that I obscure the taste of the beans themselves.

Preheat a large Dutch oven, add a splash of oil, and add the andouille. Brown the sausage and set it aside. Add a bit more oil, then sauté the sofrito ingredients until limp. Add the soaked beans and the browned sausage, all of the seasonings and enough water to cover by 1-2 inches. Bring the pot to the boil, then reduce to a simmer and cook, stirring now and then, until the beans are soft and creamy, but still hold their shape. This will take an hour and a half to two hours. Something like that. Serve over hot cooked white rice and toss on a grilled or sauteed pork sausage if the feeling grips you.

The recipe that appears on bags of Camellia red beans is a stalwart washday recipe, a little more streamlined than my version.

Rinse and sort beans. Cover beans with water and start to cook over low fire. Render meat in skillet, remove and set aside. In skillet, sauté onion, garlic, parsley and celery in meat drippings. Add meat, bay leaf, salt and pepper to beans. Boil gently, stirring occasionally for about 1-1/2 hours, or until tender. Add water while cooking if necessary. Serve with long grain rice.

Posted by Matthew Rowley at 1:54 PM

Sounds awesome. I notice you call for overnight soaking, and Camellia's recipes apparently don't. Looks like they go for the quick soak over mellow heat.
Thoughts?

To be honest, I could go either way on the quick-soak vs overnight soak on beans — and have done so. The quick-soak method sometimes makes the beans a little more ragged, but this is not a fancy dish and I don't mind a little roughness around the edges.

Putting the beans in water for an overnight soak does one thing, though, that a quick method doesn't: it compels me to actually make the dish the next day. Seriously. This is such an easy dish to make that it's a simple matter to say "Meh, the day got away from me. I'll do it some other time." That's harder to justify when there's a big bowl of soaking beans on the kitchen counter when I get up in the morning. If I don't make the dish, those will sour and go to waste.

So when I call for an overnight soak, it's not for any of the reasons you'll find in cookbooks — it's because that's me fighting my own laziness.

You'll also notice I call for putting in salt at the beginning of the cooking time rather than at the end. Some would huff that this toughens the beans. Don't believe it. I've made a lot of red beans over the years and have never noticed any toughness because I started with salt in the pot.

I either soak them or if i`m in a hurry or lazy i use canned beans. But soaked beans are better. I also like to mash some of them a bit after the cooking to make the dish more creamy.LOVE this dish! its such comfort food, just like gumbo.

D'oh! You're absolutely correct: mashing them a little helps to create a creamy consistency. I've also been using Louisiana medium grain rice as well as "popcorn" rice from Panola Pepper Corporation and from Ellis Stansel, both of which come in 2-lb fabric bags (which enterprising cocktail enthusiasts could use as impromptu Lewis bags).