I enjoy food in the broadest sense. My obsessions, though, are reserved for the preserved. Fermented, brined, smoked, pickled, cured, aged, dried, distilled, candied — these are descriptors that make me salivate. Once you know that about me, it’s no surprise that those obsessions form the pillars of my 2,000-volume culinary library. 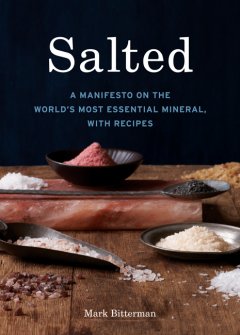 One recent acquisition has kept my attention for the better part of two weeks: Mark Bitterman’s Salted: A Manifesto on the World's Most Essential Mineral, with Recipes. When I say that the book is riveting, understand my obsessions and take it with a grain of…well, you know. But even if you don’t know a Lot about salt, my guess is that you could rattle off common names for a few different kinds of the stuff without much thought. There’s table salt, sea salt, rock salt, kosher. Most folks have a general understanding of what these look like.

Recipes in the last part of the book cover salting for preserving (e.g., gravlax, sauerkraut, preserved lemons), drinks, desserts, and brining — fairly standard things, even if the particular salts he calls for bring very specific sensations to each dish. I broke out into a slowly spreading smile, though, when I read his section on pink Himalayan salt. The gravlax is made by curing salmon between blocks of the stuff over several days. But Bitterman proposes something else entirely different; actually cooking on blocks of salt heated so hot that eggs and bacon sizzle and flank steak cooks five seconds per side (yeah, five seconds). He writes:


When you cook on Himalayan block salt, several things are happening at the same time: the heat of the block sears and browns proteins, melts fats, and caramelizes sugars, while the salt subtly dehydrates the surface and seasons the food. Together the heat and salt work in wonderful harmony, producing unique salty-toasty-caramelized flavors and delicately crisped surfaces as thin as a single layer of glaze on porcelain.

Bitterman is no mere salt enthusiast; he’s a shopkeeper as well and his careful thinking about how to use salt shines through with the voice of someone who has clearly tasted his share of the stuff and knows how to handle, store, and in some cases revive salts. His Portland, Oregon store The Meadow sells salts (and plenty of cocktail bitters) from around the world. The next time I head to Portland, that den of whiskey and home distilling, I fully intend to pay The Meadow a visit, hand over a wad of cash, and say “I’m in your hands.”

I enjoyed a luncheon presentation by Mr. Bitterman in Portland, where we were served gravlax and "bachelor's chicken breast" w/flake salt, both made from recipes in his book. It was a fascinating talk, in which he recounted how he got interested in salts and cooking. I considered the book as much a reflection on the sacrament of sharing a meal as it was a book about an edible mineral!

Ken ~ That's a good take on the book. I've been fortunate enough to know so many people in the business of food and drink. Some are charlatans, a few psychopaths, many just work a job, a few preach with the zealotry of converts, and then sometimes I'm fortunate enough to come across people like Ari Weinzweig from Zingerman's, the historian John Egerton, or Cara de Silva, for whom their particular obsessions inform why we eat together as much as what we eat together. Sorry to have missed that particular luncheon.

Sounds like an amazing book. The salt blocks really caught my attention.
Checking out his store I notice that they really a LOT of bitters (and also used tooth pics). Nice. :)