As a former cheesemonger, I have an affinity for goat. By the time I was 35, I’d eaten goat cheese in more varieties and states of ripeness of than most people will eat in their lives. And still I can’t get enough. 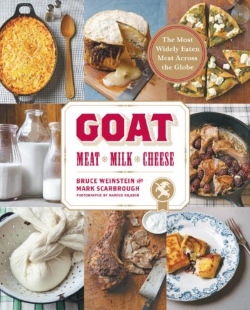 Although I’ve left behind the cool marble counters, greasy shoes, and reeking clothes of a life in cheese, it’s fair to say that we’re never without a bit of goat around whether it’s a little round of aged cheese or cabrito tacos scored from a street vendor. So I was particularly pleased to plow through Bruce Weinstein and Mark Scarbrough’s new tome, Goat.

Known widely for their blog, Real Food Has Curves, Weinstein and Scarbrough are a two-man cookbook factory, many of the titles focusing on a single category of food: brownies, say, or ham. Subtitled Meat, Milk, Cheese, this one is all about the sustainability and tastiness of what’s frankly an alien animal for most American home cooks.

If you haven’t seen goat meat around, I can only guess that you’re not going to the right markets: it’s extremely common in the US, if not yet at Kroger or Trader Joe’s. Try Middle Eastern and North African grocers or Mexican carnicerias for now and you’ll find plenty. Through recipes, sidebars, and stories, the boys explain how to use goat flesh once you’ve got it; in tagines, as vindaloo and mole, a ragu, in various stews, braised shanks, roasted legs, pulled shoulder, goat burgers, even chops and rack of goat.

There’s a whole section on goat milk and yogurt that covers muffins, danishes, lassi, soup, and a slew of desserts. But my favorite bit comes when they get into cheeses.

Now, very few cheesemongers who sell the stuff will admit it, but we hate gjetost, the American name for the sweet, brown, lightly caramelized Norwegian goat cheese made so popular in the yuppie 1980’s. It’s difficult to clean off our knives and counters. It cleaves to the roofs of our mouths like clay. Customers who rave about how wonderful and sophisticated it is (“Ooo, try with apples and white wine. It’s soooo good!”) are immediately suspect. Don’t believe me? Order it at a good cheese shop and watch the cheesemonger’s eyes go dull. Bitchy ones will actually sigh. We try to steer them to better cheeses, but the truth is that those dense, vacuum-packed blocks keep forever, the margins are good, and at the end of the day cheesemongers got bills to pay just like everyone else. You want gjetost? Fine. Here it is. The boys’ encounter with a frosty Norwegian cheesemonger who turns them away when they try to order some speaks volumes.

They’re on the right track, however, with a simple soft goat cheese turnover called briwat that's common from Morocco to Syria. Pre-made spring roll wrappers stand in for the traditional handmade pastry and make this a quick dish to prep. It also calls for Aleppo pepper, a crimson crushed chile sold with its seeds removed that’s a staple in our kitchen and that I’ve long found a great match with goat cheeses.

Mix the fresh chevre or soft goat cheese, cilantro, pepper, and one of the egg yolks in a bowl until creamy and smooth.

Whisk the 2 remaining egg yolks in a second bowl until creamy and light.

Put a spring roll wrapper on a dry, clean part of your counter so that it makes a diamond [shape] in front of you (one point facing you). Put 1 tablespoon of the goat cheese filling on it, situated a little toward you from the center, a little toward the “bottom” point.

Roll the bottom point over the filling. Then fold the points to the left and right over the filling. Brush the remaining “top” corner with a little of the beaten egg yolks and roll the spring roll over so that it sticks to this egg-washed corner. Press it a little to seal if you need to. One tip: Make sure you roll fairly tightly. Air pockets inside the packet will expand and can pop open as the thing is fried.

Repeat with the remaining wrappers, filling, and egg wash.

Fill a sauté pan or high-sided skillet with peanut oil to a depth of 1 inch/2.5cm. Clip a deep-frying thermometer to the inside of the pan and heat the oil over medium heat until it reaches 325°F/165°C. Drop 4-6 briwat rolls into the hot oil — do not crowd the pan — and adjust the temperature so that the oil stays right around 325°F/165°C. Fry until golden, about six minutes, turning once. Transfer the rolls to a wire rack with paper towels underneath it to catch any grease drips. Continue frying more. Once you’ve got them all done, set them on a serving platter with a bowl of honey on the side to dip them in one at a time. Pure bliss.

I love it that we're a two-man industry. Makes it sound so important! (Most days, I feel I'm just schlepping through.)

Smokestacks and everything ;) I tease a little, Mark. In all honesty, my hat's off to you two. You've got more good books under your belt already than I'm likely to write in the rest of my life.

I did get an email from a cheesemonger I know this morning who did not post here for fear of being traced back to his employer. We'll call him Sam. Sam writes:

GREAT description of the mongers' opinion of Gjetost. I always reference the menu at Monks Cafe [http://www.monkscafe.com/], where at the bottom of the last page it reads: "We are not proud to sell Bud Light and Miller Light, but if you will pay $6 a bottle for it, we will sell it to you." Pretty much says it all.