Bookshelf: How to Drink 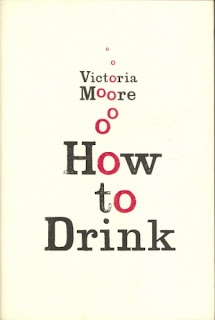 In all honesty, I gave Victoria Moore’s book short shrift when a copy landed on my desk. Plain jacket, presumptuous title. How to Drink? I’m Matthew Rowley, damn it. I’m a connoisseur of teas, have designed stills, own more bitters than shoes, have hauled endangered bottles across borders, hunted forgotten ingredients, and faced down violently paranoid moonshiners without incident. If I know how to do anything, I bloody well know how to drink, thank you.

I can only imagine I was in a monumentally Irish mood when the book arrived.

How to Drink is a delight. It works on two levels. First, there’s the design — an old fashioned, charming sensibility is at work that blends typeset with illustration and suggests at turns both Arts and Crafts Movement and Hatch Show Print fonts. With so much of our modern media reliant on videos and photos, it’s refreshing to find playfulness in something so simple as letters turned slightly askew to become something else entirely.

Second, and more to the point, Moore’s is an opinionated but commonsense and welcoming tone. She writes most frequently on wine in her columns — a genre I largely avoid — but the book also covers tea, coffee, juices, cocktails, cool weather drinks, hot weather drinks, glamorous sips, and homey quaffs. I’m especially taken with her concept of a “good” drink as the right drink poured at just the right moment. She writes: “It’s often said that life’s too short to drink bad wine, but I’d go further. Life’s also too short to drink good wine, or anything else for that matter, if it’s not what you feel like at the time. There’s no point in popping the cork on a bottle of vintage champagne if you really hanker after a squat tumbler of rough red wine.”

Although she has her own voice, I’d put Moore's writing on the same shelf with Nigel Slater’s, Hugh Fearnley-Whittingstall’s, and even — there at the end — H.E. Bates'. It is writing such as hers that lays the rationale of nostalgia: we take time to do things properly because doing so coaxes the very best out of us and what we do, eat, and drink. Moore is very much about the rituals of drinking, say, having a favorite tea cup that makes tea from any other less enjoyable or even a downright insult. She devotes four pages to the gin & tonic, then spends another nine pages on gin — what it is, which brands she prefers, and why. Very sensible. She is as exacting in her approach to an old fashioned as I am and I suspect we could each make the other a pot of tea and be happy with the results.

Yet as much as I know about the hows and whys of drinking, Moore offers surprises. I detest coffee, yet she brings as much attention to detail to bear on the subject that, despite myself, I read every word. I’m still not buying any, but if I had to do so for someone else, I’ve got a better grip than I did of how to go about doing it. Far from being a toss-off, How to Drink is exactly the kind of book with which I like to curl on the couch and mull over why we drink as much as what we drink.

Since blood oranges are in season, I offer you what Moore calls her favorite drink (and her family calls “the Campari and blood-orange thing”). Simple, light, a solid balance of bitter and sweet. I’m putting it on the menu as our weather warms and my mind turns to lazy weekend brunches.

Pour the ingredients into a jug. Serve in small champagne flutes or wineglasses.

Terrific column, thanks, Matthew. "How to Drink" has definitely been added to my list.

Followed your link to Hatch Show Print -- WOW. When owner said he's from Salina I did a frantic search to find out whether he might have gone to KU. No such luck, but I did find out that he and his staff pulled together a big book of historical prints by their shop. Grabbed it from Amazon. Extremely excited.
They have a fantastic website, great videos, etc. Thanks for the tip, Matthew.