Bookshelf: The Social History of Bourbon

My father is a Kentucky Colonel. It is with deep regret that I understand this bluegrass mantel is not hereditary, that if I wish to attain that rank, I must do so on my own paltry merits. I try in other ways to promote the Commonwealth, most notably by pouring for my guests that amber fruitage of Kentucky corn so praised among the world's drinking classes. Like my grandfather before me, I drink bourbon.

Before my lips ever touched homemade liquor, I knew the aroma and taste of Kentucky bourbon. The copper-topped dry sink at which my grandfather mixed his nightly Manhattans now stands in my living room, where it never truly runs dry. As a child, when I grew tall enough to see over its top, I would occasionally snag a boozy cherry while he wasn’t looking. I am convinced that he doubled up cherries in his drink because he knew exactly what I was doing. 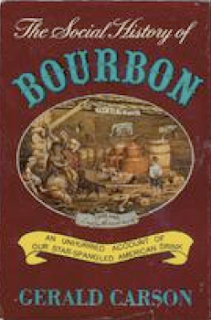 So it is with pleasure that I note that the University Press of Kentucky has re-released Gerald Carson’s 1963 book The Social History of Bourbon. If I didn’t already keep a first edition on my desk, I’d say this was cause to raise a glass.

This isn’t a review. This is just a few words about a book I really like. I admit right up front that in many places, it reads like a promotional piece for the distilleries themselves. So be it. Caveat lector. In addition to tracing the origins and trajectory of our native spirit, it’s got moonshine, applejack, Prohibition, and Civil War doctors drinking all the spirits they could seize under the guise of medical need. It goes into the families and personalities of bourbon’s early history and does so with humor at turns both subtle and broad.

Carson, like so many before and after him, can’t seem to talk about this most famous of Kentucky beverages without turning a bit poetic. Consider the following passage:


The judgment of some of the old taste-testers bordered upon the miraculous. They have been known to name the country, the exact valley, the creek bottom, in which an aromatic bourbon was made. What they knew came not out of books but out of bottles.

What they knew came not out of books but out of bottles. I love this line. It raises these old taste-testers from mere men who drink too much to connoisseurs of almost mythic stature.

I’ll raise a glass to the Kentucky Colonels tonight, but most especially to my father, who remains a man of almost mythic stature.