Known as Mrs. Marshall to her tens of thousands of students, readers, and customers, Agnes B. Marshall is nearly forgotten these days. What a loss. In her heyday, the Victorian food maven was as much a household name as Anthony Bourdain, Julia Child, or — God help us — Guy Fieri is today. 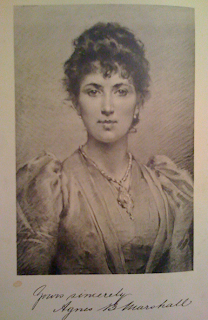 An even more apt comparison might be Martha Stewart. Like Stewart, Mrs. Marshall opened an umbrella of business ventures — and seems to have excelled in them all. She ran a cookery school in London; sold fancy cookware; hawked a variety of compounds, essences, and syrups under her own label; and generally championed wholesome cookery in an era when toxically adulterated food was commonplace. She published two early books on ices (that is, ice creams, water ices, sorbets, bombes, etc.) and is known to have published recipes for making and using ice cream cones almost two decades before their supposed invention at the 1904 St. Louis World’s Fair. [1]

Generations before today’s molecular gastonomists began deconstructing S’mores, lashing cocktails with smoked foam, and otherwise digging into the science of how food does what it does, she also seems to have been the first person to advocate mixing liquid air with ice cream ingredients to make nearly instant ice cream.


Persons scientifically inclined may perhaps like to amuse and instruct their friends as well as feed them when they invite them to the house. By the aid of liquid oxygen, for example each guest at a dinner party may make his or her own ice cream at the table by simply stirring with a spoon the ingredients of ice cream to which a few drops of liquid air has been added by the servant.

~ Mrs. Agnes B. Marshall
The Table (24 August, 1901)
Turns out that the recipe doesn’t quite work (more than “a few drops” is necessary to make ice cream at the table), but the idea was solid and — in absence of servants — has been reproduced in high school chemistry labs around the United States for decades. It’s exactly the sort of scientifically inspired experimentation that supposedly avant garde molecular gastronomists and molecular mixologists [2] are using to thrill and delight their customers in 2010.

In an essay included in a 1998 reprint of Marshall’s Book of Ices [2], Peter Barham conjectures that Marshall thought of table-made ice cream after seeing or hearing about the public lectures of chemist Sir James Dewar. Dewar was the first to liquefy nitrogen. As the 19th century drew to a close, he’d gotten better at producing it in quantities — though “liquid air” was still a rare curiosity by the time Marshall wrote about it. Dewar nonetheless made a series of popular demonstrations about the new substance. While the rest of his audiences may have been mesmerized by the white “fog” generated when liquid nitrogen is poured into water, Barham surmises that Marshall took inspiration in the frozen water left in the bowl. The Queen of Ice Cream had found a new subject.

Liquid air isn’t new. Nor is ice cream. Turns out that molecular gastronomy isn’t either. But they’re all worth digging into a little more.

As anyone who knows me can tell you, I'm starting with the ice cream.

[1] Although wafers of various kinds have been made for centuries, ice cream vendors have been stuffing them with the cold stuff for more than 200 years, so they weren’t exactly new to Mrs. Marshall — but she did help popularize them. See Robin [credited as "Robert J."] Weir’s Essay An 1807 Ice Cream Cone: Discovery and Evidence.

[3] Their term. Not mine. See Darcy O’Neil’s An Introduction to Molecular Mixology for a straightforward discussion of molecular mixology at Art of Drink.
Posted by Matthew Rowley at 4:08 PM