The bar of New Orleans chef Donald Link’s restaurant Cochon had a reputation as a place a casual drinker might get a snootful of legal liquors evoking moonshine’s tumultuous history. So during Tales of the Cocktail last year I brought together a band of professional and home distillers for a dinner at Cochon to run Chef Stephen Stryjewski and his crew through their paces—crawfish pie, boudin, fried rabbit livers, dark gumbo, the softball-sized cochon, rabbit & dumplings, oysters, and crispy breaded pig ears sliced pencil thin. Bar manager Audrey Rodriguez even brought out a bottle of Ted Breaux’s La Perique liqueur made from St. James Parish Perique tobacco. It was one of the best meals I’d eaten in 2008.

While I like what Stryjewski and Link do with the bounty of Louisiana, it’s their prowess with pork that keeps me coming back. 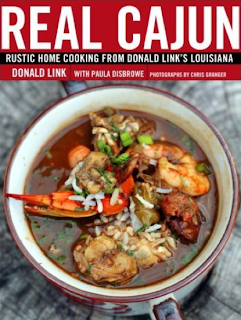 Fortunately, a trip to New Orleans isn’t strictly necessary to get a taste of what Link is up to. With the release of his cookbook Real Cajun: Rustic Home Cooking from Donald Link’s Louisiana, a lot of those recipes are within reach whether you live in Iowa City, Sioux Falls, London, or Los Angeles.

The rabbit livers are there, though parading as chicken livers. So is boudin. And homemade bacon. There’s an entire chapter called simply “La Vie Cochon.” But by and large, and with some exceptions, this isn’t restaurant cooking. Link places his recipes squarely in the cookery traditions of rural south Louisiana, so you’ll find deer sausage, baked oysters, crawfish etouffe, dirty rice, and various gumbos. Even when he gets fancy, the foods’ country roots are apparent. Catfish fried in bacon fat, anyone?

The desserts in particular—Satsuma buttermilk pie, German chocolate cake, blueberry ice cream, and strawberries with cornmeal shortcakes—make me pine for Louisiana. Until I get back to Cochon, there's Real Cajun to keep my envie for boucherie at bay. 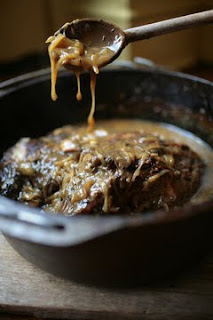 I wasn’t joshing about the appeal of Link’s pork recipes. Last week, I bought a 13-pound pork shoulder and made two recipes from Real Cajun—smothered pork roast (at right, photo by Chris Granger) and simple pork sausage. The smothered pork is great over rice, but I also froze a bit to use as filling for enchiladas (encebolladas?) once I get back from a road trip. The sausage I froze in small pucks to use in omelets, on pizza, tossed with green beans, cooked with white beans, stuffed into quesadillas, and on more pizza. We’ll get to the sausage recipe—and what I did to it—later this week.

Preheat the oven to 275˚ Fahrenheit.

Season the pork very generously with salt and pepper, rubbing the seasonings into the fat and flesh of the meat. Set the roast aside for at least 30 minutes or up to 1 hour at room temperature.

Combine the onions, garlic, thyme and rosemary in a medium mixing bowl and toss to combine.

Heat the vegetable oil in a Dutch oven over medium-high heat. When the oil is very hot, sear the meat on all sides until deeply browned and crusty, 10 to 12 minutes.

Transfer the meat to a plate, reduce the heat to medium, and then stir in the butter. When the butter has melted, stir in the flour to make a roux and continue to cook, stirring, until the roux turns a dark peanut butter color, about 10 minutes.

Add the onion mixture and cook, stirring, until all the ingredients are well coated and the mixture is thick. Whisk in the chicken broth and bring to a simmer, stirring constantly. Return the pork to the Dutch oven, spoon some of the onion mixture over the meat, cover, and roast for about 3 hours, turning and basting the pork every 30 minutes or so, until the meat will break apart when pressed gently with a fork.

At this point, you can serve the roast right out of the pan, or transfer it to a plate, then simmer the pan drippings, skimming off excess fat, until reduced by about one-third, or until it coats the back of a spoon. Add the lemon juice and taste for seasonings.

Before serving, sprinkle the roast with some additional salt. Serve the roast smothered with a generous amount of sauce and hot steamed rice.

Oh wow, that's great, I really like Link's cooking! And my birthday is coming up! Perfect!

I'm not 100% sure, but the good folks at Cochon Butcher might just be able to send a care package—andouille, bacon pralines, etc. for special occasions such as birthdays...

That book looks very good, Erik yourè in for a treat i`m sure.
Interesting post Matt!

It IS good, Tiare ~ I've since heard from a number of people, all of whom cooked the smothered pork. It's just got a strong appeal, I suppose.