Tiki culture—or Polynesian pop as some have it—is an odd duck. An argument can be made that nothing about it is real. After all, it’s a 21st century recreation of what our Mid-century parents and grandparents may have embraced as a wholly fabricated mish-mash of a re-imagined mythical South Seas paradise, fueled on rum, sex, tropical print shirts, and noble-savage-type primitivism. 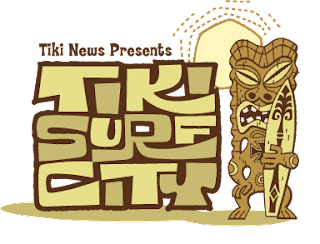 Now, as a distiller, French literary criticism is not a tool I have all that much call to use, but that seems an awful lot like what Jean Baudrillard had in mind when he tackled notions of simulacra and hyperreality in which fantasy and reality are so blurred that one is indistinguishable from the other.

All that may all be true. And “authentic” is undeniably a slippery word to use for tiki gatherings and bars—but don’t think for a minute that tiki culture isn’t real. When the annual gathering Tiki Oasis pitched a tent in San Diego a few weeks ago, I got an insider’s look at an entire hotel filled with nothing but tiki aficionados and service staff. 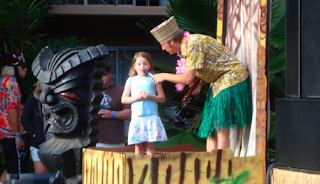 The first thing you’ll notice in such a setting is that tiki is about fashion. Whether it’s the coconut-shell purses clutched by many of the lovely wahines in attendance, the tropical shirts on the men, the Bettie Page-style makeup, or the sea of hats, there’s a distinctive vintage look. Real? Meh. Real enough to the vendors who showed up to sell tiki mugs, carvings, jewelry, books, posters, glassware, barware, tiki drink guides, hats and fezzes, towels, coasters, and lawn ornaments.

Secondly—and it doesn’t take long to realize this—tiki folk are about the nicest bunch of people you’d ever want to meet. Their friendliness is as genuine as the sunrise. Truly, other than employees, everyone was there for Tiki Oasis. The attendees were friendly and eager to talk about their obsession hobby, sharing tips on what rums are best for their favorite drinks, salvaging old tiki architecture in Southern California…shoot, there was even a Tiki Friends of Bill group for recovering alcoholics who just couldn’t leave behind the scene when they gave up the bottle.

Martin Cate led a sampling of Appleton Estate rums paired with chocolates, Holden Westland of Tiki Farm sold mugs like they held the secrets of eternal youth, Brazilian filmmaker Duda Leite led showings of his short film Tikimentary, Baby Doe of the San Franscisco-based Devil-ettes gave go-go dancing lessons, and—in case you wanted to get all dolled up like a pin-up, San Diego’s burlesque queen Lady Borgia showed how in an afternoon session.

But my favorite discovery of the weekend had to be Denny Moynahan’s onstage persona as King Kukulele, ruling monarch of novelty ukulele songs. Complete with Converse sneaks, white socks, a plastic grass skirt, reed crown, and ukulele-on-a-string, he's one of the best acts I've seen all year. Yeah, I know. It doesn’t sound like my usual playlist (“Novelty songs, Rowley? For real? Lame.”), and he's about as authentically Hawaiian as I am, but you’ve got to see the King anytime he’s playing near you. Just go. He’s funny, charming, and totally disarming. He’s sweet with the kids and taunts adults good-naturedly. I don’t know if I need to book him for my next birthday ho-down or just plan on attending next year’s Tiki Oasis, but King Kukulele and I haven’t seen the last of each other.
Posted by Matthew Rowley at 3:14 PM

So glad you enjoyed yourself at Oasis! Yes, we are a friendly bunch! But King Kukulele? Really? I can stand about 5 minutes of it before wanting to hurt myself or someone else!

Oh, I completely blew him off the first night I saw him entertaining kids on the dance floor at the Bali Hai. Went straight to the bar and starting talking up attendees. It wasn't until the next day that I started paying attention to him.

I'm not saying I want KK 24/7 or that I'd be playing his music at a party when he's not actually performing, but I'm a big fan of self-deprecating silly and he's got it in spades.