He Gurgled When He Walked

Charlie over at Modern Mechanix sells stuff on eBay. Cool stuff. Seems like old magazines, mostly. Don't know him, never met him. But I'll be keeping a closer eye on his blog after he posted pdfs of a 1930 article titled Tricks of the Rum Runners by Pat Roche, a one-time Treasury agent. 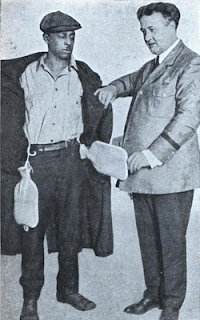 The cutting plant buys large quantities of genuine liquor from the runners, opens the bottles, and adds an equal part of alcohol and an equal part of water, making three cases out of one. Flavoring and coloring matter also are added to bring the taste and appearance up to the original. Bottles, either purchased new from glass plants which make them to order and duplicate any foreign product in shape, size and appearance, or bought from old bottle dealers who have built up a market for empties, are used. The finished product can not be told from the original.

If it's just flavoring and "coloring matter" drinkers were lucky. But what flavor? What matter 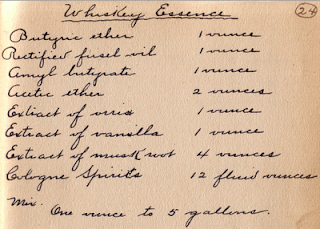 ? The scan here is from a Prohibition-era moonshiner's secret hand-written notebook in my library and gives a clue to how one might cook up a batch of "whiskey essence"—butyric ether, rectified fusel oil, extracts of musk root, orris (root) and vanilla and others in a Cologne spirits base. Yum.

Check out Charlie's post for the full text of Roche's article and four pages of full-page pdfs. The caption on the picture at the header reads:

A unique method of liquor transportation via hot water bottles. The culprit was captured by a detective curious as to why the negro gurgled when he walked.

Given the profits margins of faked whiskey in 1930's Chicago, I wouldn't be surprised if every man, woman, and child gurgled just a little as they walked. Of course, if you're stuck using hot water bottles to transport liquor, the trick is to secure both ends.

I don't suppose that the technical names for compounds that give actual whiskey its flavor sound much tastier than the fake versions used by rum-runners. Which is not to say that I want to start swilling bottles of butyric ether and rectified fusel oil...

That's true ~ but when bootleggers chasing profit start adding fusel oil (what distillers nowadays call fusel alcohol from the German "Fusel" for "rotgut") back into the mix, I get a little antsy. Creosote figures into several recipes in the manuscript, too, though I don't mind the vanilla, orris, etc, extracts. If memory serves, I've got a sheaf of vanilla pods macerating in whiskey somewhere in one of these cabinets...