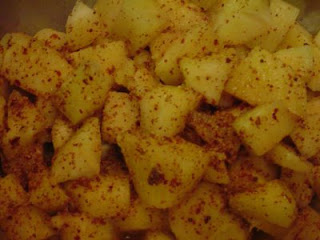 Korean and Indonesian cooking will stop me in my tracks, though I am forbidden from making kimchee at home and, in San Diego, it’s the occasional soto, rendang, or sambal on a supposedly Chinese menu that hint at an Indonesian influence in the kitchen.

At one of our occasional shindigs, both Mama Charlie and Dr. Smokesalot (whose respective mothers are Korean) brought bulgogi for grilling. Some call bulgogi Korean barbecue. I call it a very good night for me. The thin-cut sirloin was marinated in garlic, rice wine, sesame oil, red pepper, soy, sugar, and lords knows what else. Rice was a given.

Last night, with a batch of bulgogi waiting for the grill to heat, I veered off-course and cranked out an Indonesian-inspired pickle to go with the beef. You could just as easily call it a sambal. The recipe is loosely adapted from Rosemary Brissenden’s classic South East Asian Food and is best in the first 24 hours. If you buy your fresh pineapples trimmed and cored, this won’t even take five minutes to throw together.

The stuff goes great with bulgogi, of course, but it turns out also grilled chicken and fish, carnitas, and pork chops. It's lightly salty, kinda pungent, but sweet at the same time. Break open a beer or three while you're at it.

Don’t be scared of the fish sauce; it is an essential foil to the sweetness of the pineapple. I’m tempted to say it’s optional, but if fish sauce skeeves you, eh, just skip the recipe and open a can of pork and beans.

Grind the red pepper, garlic, ginger, mustard seeds, and salt together, using a bit of vinegar if necessary to make a loose paste. Combine the paste with the remaining ingredients in a large mixing bowl.

* I used Crushed Aleppo pepper from Penzey's: hot, slightly oily, but not so pungent that you can't taste that the pepper is actually a fruit.