Never be untidy or drink with a savage.
There is nothing worse than drinking
when you are trying to tie up a mark.
You've got to have your nut about you all the time.
You need what little sense you've got to trim him—and
if you had any sense at all,
you wouldn't be a grifter.

Today, we've got something on the fringes of saloon culture and the sporting life. I've spent uncounted hours — years, even — in the company of criminals. Moonshiners, mostly, but thieves, embezzlers, enforcers, bad cops, and felons of various stripes. One connected mook I knew in Philadelphia had $80,000 stolen from his closet and didn't report it because, well, it wasn't the sort of stash one wanted to explain to the 5-0. After nearly three decades of hearing and hearing about cons, the patter of confidence games, scams, and rip-offs spike in the conversational landscape like flashes of lightning. 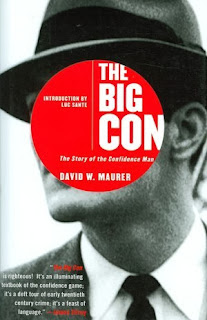 Short cons, designed to separate a person from the money he is carrying on him, seem particularly obvious. In fact, on my recent trip to Puerto Vallarta, the short con was ubiquitous; vendors, waiters, taxi drivers, fixers, and others tried to shave a bit of trim from tourists. Here, someone "forgets" to give the right change, there someone else pads the bill with an entree nobody ordered. For the locals, it must be like shooting fish in a barrel. The short con is not always a terrible thing. In New Orleans, if a little kid bets you a dollar that he can tell you where you got your shoes, take the bet, lose a buck, and walk away with everyone smiling. A con, sure, but also a dollar's worth of entertainment.

Then there's the big con. Almost nobody walks away from a big con with a smile. In 1940, University of Kentucky linguist David W. Maurer published The Big Con, his study of confidence men, suave criminals who, from the late nineteenth to early twentieth centuries, bilked marks out of enormous amounts of money. By the time Maurer wrote his book, this particular style of grift was already in its decline. Nominally concerning the language of these mostly nonviolent criminals who gained the confidence of newly-made millionaires, well-to-do farmers, wealthy businessmen, and others who could get their hands on lumps of cash, the book is simply fun reading.

Maurer introduces grifters such as the Yellow Kid, Crawfish Bob, Limehouse Chapppie, the Big Alabama Kid, Slobbering Bob, the Postal Kid, Queer-pusher Nick, the Hashhouse Kid, Fifth Avenue Fred, the Indiana Wonder, the Jew Kid, Tear-off Arthur, Devil's Island Eddie, and the High Ass Kid. You'll learn about the blow-off, the cackle-bladder, the wire, the rag, the pay-off, and a whole lot more of the language you might expect to hear around Prohibition-era saloons, joints, and hangouts.

In the world of criminals of the period, con men were talked about as the aristocrats of crime. Insidemen who maintained big stores (fake betting parlors, brokerages, and gambling dens where mark were fleeced one right after the other) traveled widely, stayed at the finest hotels, dined well, dressed impeccably, sometimes had drivers and avoided socializing with 'lesser' criminals such as second-story men, pickpockets, and heavy racket types who resorted to violence. They leveraged and worked with crooked cops, hoteliers, circus managers, train conductors, detectives, judges, district attorneys, and saloonkeepers. They almost never worked their home town or anyone who lived in the town in which they operated. Rather, they worked over travelers on ocean liners and, especially, trains.


The ease with which people make traveling acquaintances may account for the great number of marks which are roped on trains or ships. When a mark is off his home ground, he is no longer so sure of himself; he likes to impress important-looking strangers; he has the leisure to become expansive, and he likes to feel that he is recognized as a good fellow. The natural barrier to friendships come down. He idles away time chatting and smoking in a way he would not do at home. And the roper knows how to play upon the festive note which is always latent in a traveler away from home.

Cities such as New York, Denver, Chicago, and New Orleans had hundreds of ropers working the trains feeding the city. When they found a mark they felt could be taken for $10,000, $50,000, or more, the roper befriended the 'savage' and brought him into town to meet the insideman who would propose a sure-fire way to make money...illegally.

And the whole con hangs on that. Con men felt that they could never cheat an honest man because he wouldn't take the bait of a crooked way to make a killing by, say, delaying the results of a horse race by a few minutes to place a bet with the help of a disgruntled wire operator. But, writes Maurer, the first world war "brought a crop of millionaires and sub-millionaires whose purses swelled out of all proportion to their knowledge of investments. As soon not these men had made the money slightly on the shady side and to them the rag and the pay-off [two types of con games] appeared as very logical methods of taking profit." These were the marks on whom con men preyed.

If you've enjoyed movies such as Dirty Rotten Scoundrels, David Mamet's House of Cards, The Sting, and — especially — The Grifters, do yourself a favor and check out Maurer's book. Nicholas Cage in Matchstick Men is a lesser contribution to the genre, but even bits of Django Unchained seem lifted from its pages. It's back in print with a forward by Luc Sante from Random House's Anchor Books imprint.