Our neighbor has been feeding the squirrels. Now, I like our neighbor and have no beef with squirrels...in the abstract. Watching them frolic in the park has always given me a smile and I've bottle-raised scads of Midwestern grey squirrels back in my days as a nature center volunteer.

These days, however, I own a home and the footing is far less certain for those little red-tailed beasts. The current crop of chattering rodents raids the garden, gets under the eaves, and digs holes all over the yard. They're not nearly so charming when they turn destructive. Yet they come to gorge themselves on peanuts laid out just over the fence by our well-meaning neighbor. As they feast, they drop spent shells over the ground. The shells don't particularly bother me. Easy enough to shovel up every week or so, but the destruction is getting out of hand and if they start chewing on wiring, we could have some serious safety problems.

It occurred to me that peanut-raised squirrels might —like hogs finished on acorns, peanuts, or chestnuts — be delicious. Smoked is, of course, one way to go, but with so little fat on them, they'd need wrapping in bacon or some other basting arrangement. Stewed squirrel has always been popular in parts of the American South. Brunswick stew, though mostly made with chicken these days, was often made with squirrel — and is a great accompaniment to pulled pork barbecue. A bit more than I want to tackle today, though. 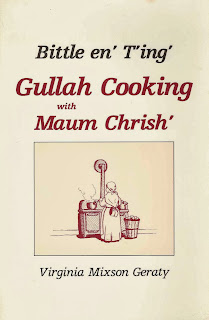 With that in mind, I pulled out a South Carolina recipe for 'squayrill stoo' or, rather, squirrel stew. The unusual spelling stems from the fact that the recipe is from a book of Gullah cooking called Bittle en' T'ing: Gullah Cooking with Maum Chrish' by Virginia Mixson Geraty. The Gullah are an African American people who have long lived in coastal South Carolina and Georgia — heavy on the "African." Gullah speak a creole language derived from Sierra Leone Krio, tell African folktales, make African handicrafts, and are largely descended from slave laborers who worked on rice plantations in the area.

Here's Geraty's take on what to do with the little buggers — first in Gullah, then in standard American English. Remember to sabe de tail fuh de mens weh on dem hat.

Be careful when you skin the squirrel. Nail the hide up to dry for a collar. It makes a nice fur piece. Save the squirrel's tail for a man to wear on his hat.

Clean the squirrel and rub it with salt and pepper. Dredge it with flour and brown it in bacon drippings.

While the squirrel is browning, chop a large onion and have it ready to put in the pot. Add enough water to cover the squirrel, and add the onion. Put a lid on the pot and set it back on the range to cook until the meat is tender and the gravy is thick.

One squirrel will make enough stew for four people.

Posted by Matthew Rowley at 9:58 AM

I'm assuming a shotgun would make too much noise in your neighborhood.

Havahart trap baited with peanuts. The squirrels positively dote on them.

The irony, of course, is that — like the dread bailiff AB Dreverhaven in F. Bordewijk's 1938 novel Karakter — I have, except in the literal sense, no heart whatsoever.

At least that's what I tell people.

Same here, as goes the no heart thing, except that if you're really planning to shoot something it's absolutely impossible once it's in a live trap.

That, plus you've actually read whatever book that is and understood it? Jesus, you're erudite! :^D