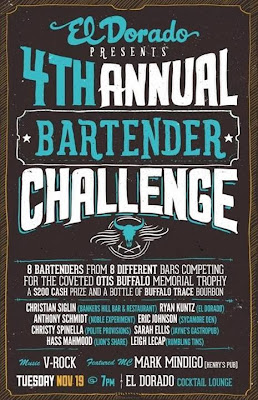 Ladies and gentlemen, boys and girls, children of all ages: be advised that tonight and tonight only, a cohort of San Diego bartenders are going mano a mano in the fourth annual Bartender Challenge.

Held each year at El Dorado cocktail lounge, the challenge pits bartenders making drinks against each other in elimination bouts until only one remains, a champion bestowed with $200 in walking around money, the coveted Otis Buffalo Memorial Trophy, and a bottle of Buffalo Trace bourbon.

The twist? Each round a new secret ingredient, Iron Chef style, is introduced to the mix. Bartenders mix a drink on the fly using the secret ingredient and an arsenal of bitters, modifiers, juices, garnishes, and whatnot in four minutes.

Come on down; the Bartender Challenge is always a fun time and a chance to meet up with staff from some of the city's great watering holes in one place. I'll be there, taking a rare weeknight break from a handful of book projects while projecting the mien of a sober and stoic judge.