Tabasco Sauce in the Applejack

All but the most degenerate boozers reach for some drinks before others. Nothing wrong with having our favorites, although the punctilious zealotry of the martini and mint julep crowds can get overbearing. Throw all the juices, syrups, tinctures, spices, and whatnot at the modern bartender's command into the equation and folks can get downright obsessive about what works in their cups and what doesn't. "Any guy who'd put rye in a mint julep and crush the leaves," wrote opinionated Kentucky bullshitter Irvin S. Cobb, "would put scorpions in a baby's bed." Exaggeration. Probably. Who knows? Cobb lied like it was his job. Because it was his job. But scorpions, though? Best to keep that old corn guzzler away from babies and not chance it. 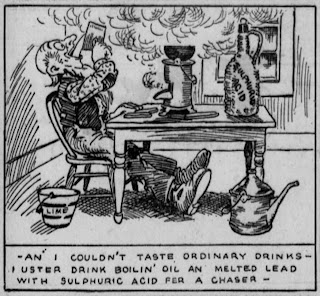 Hot sauce is where I usually put on the brakes when it comes to cocktails. All things being equal, a dose of cayenne, chipotle, or tabasco peppers in the glass will generally make me pass. The heat's no problem. In fact, we bust out homemade hot sauces for weekend breakfasts and weeknight dinners often.  On a hot day, a round or three of micheladas hits the spot. When the temptation to mix chiles and liquor occasionally does strike, it's liable to take the guise of a Snapper, that vastly superior Bloody Mary cousin that replaces vodka with gin. We've used Cholula to good effect in a Caesar-type concoction titrated with the barest volume of absinthe. A sangrita with blanco tequila is not the worst option for daytime drinking. The common element? Tomato. Paired with and tempered by tomato, hot sauce might — just might — bring a drink together, but otherwise in most drinks the stuff is just gimmicky, an exercise in machismo, in how much heat one can handle.

Back in Philadelphia, cheesemonger friends collected the oily drippings from fifty- and hundred-pound aging provolone cheeses in eight-ounce plastic tubs. After weeks or even months, they'd label the cloudy, yellowish — and pungent — accumulation Prank Juice. At some point, some jackass who needed taking down a peg was going to swallow that nightmare fluid.

Hot sauce in so many drinks is kin to that South Philly prank juice. And the joke is old, old, old. From 1904 to 1908, cartoonist H.C. Greening penned a comic that featured Uncle George Washington Bings, Esquire, a literary descendant of cannonball-riding Baron Münchhausen and forefather of 1960's blowhard Commander McBragg. In the strips, Bings was a small-town braggart, forever telling tall tales about his exploits around the world. The Los Angeles Herald ran a six panel strip in 1905 which Bings belittles a fire-eater to villagers sitting around a bar's pot-bellied stove. "Why," he claims, "I could make that bluff look like a December frost." As he warms up to some choice braggadocio, the mischievous bartender dashes hot sauce in his applejack.

His reaction? Just about what you'd expect from anyone who'd been given a well-deserved dose of prank juice.

Posted by Matthew Rowley at 7:20 AM