Winners of The Drunken Botanist (with Five Recipes)

“Do you know of this?” my friend EJ emailed.
“I just stumbled upon it and think I am going to pick one up.”
The link in his note was for Amy Stewart’s new book
The Drunken Botanist.
Within seconds I typed back:
“Buy it immediately.” 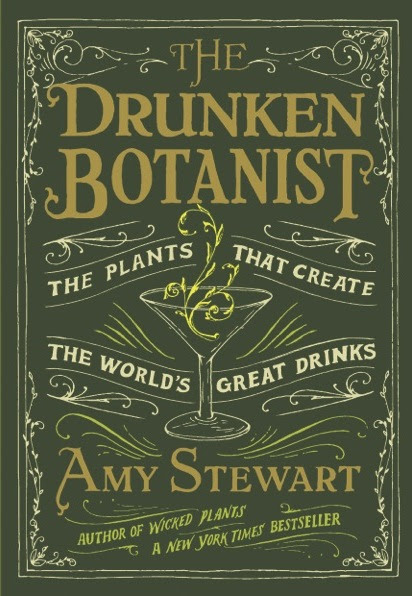 Last week, I heaped a bunch of plaudits on Amy Stewart's new book The Drunken Botanist. Her publisher, Algonquin Books of Chapel Hill, offered to send five copies of the cook to readers of the Whiskey Forge. Rather than simply send a copy to random commenters like those who flock to any and all online giveaways, I put a twist on the rules and stipulated that those who wanted to throw their hats in the ring must also provide recipe in the comments to qualify. To keep it, in other words, among us booze geeks. I want to read about, I wrote,


...your favorite alcoholic drink that relies on plants to give it some distinguishing character — a cocktail, a homemade cordial or bitters recipe, your grandmother's amaro or your college roommate's homemade absinthe. Whatever. But it's got to have booze, beer, or wine (nothing against tea, but tea hardly makes botanists drunk) and it's got to demonstrate some distinctive plant characteristic. What that means is up to you: I want to see what you've got.

The results are in. Thank you everyone who sent in recipes — I'm working all weekend, but my mind keeps coming back to the new drinks I want to make. Five comments (selected using The Randomizer) came up winners. Those five should email me (moonshinearchives at gmail dot com) with mailing addresses ASAP.

First up is Sam K with his recipe for the Pennsylvanian/Lithuanian specialty, Boilo:


Always served warm, it is a soothing companion on a cold winter's night.

Take all ingredients except whiskey and bring to a slow simmer for about a half hour. I prefer to peel the citrus to avoid leaching the more bitter oils into the potion. Allow to cool slightly and strain. Add the blended whiskey just before serving.

This will keep for some time. The blended whiskey is the main traditional ingredient here, really, and though I've read that the cheaper it is, the better, that's crap. There really is a substantial difference between, say, Fleischmann's and Four Queens (which has a slightly higher percentage of actual whiskey and is bottled at 100 proof). I know...I've ruined en entire batch by using Fleischmann's.

I suppose you could do even better by using three parts vodka and one part bourbon, but the miners always called for blended, and who am I to argue with tradition? That, plus they'd kick my ass! Second, Nick in Chapel Hill gives his take on a jalapeno honey-spiced Brown Derby:

From the cane fields of south Louisiana, John Couchot contributes his Rum Rickey Gone Local. the flavors of US sugarcane, he writes, "truly shine in this combination."

Sylvan presents a slight twist on Sam Ross' new classic, the Penicillin Cocktail. This is my variation on Sam Ross' wonderful 'cold Scotch toddy'. "I never have 'ginger-honey syrup,'" he writes, "so I usually make honey syrup to order (no need to let it cool) and muddle fresh ginger."

Slice a few (to taste) 1/8" slices of ginger and muddle in a mixing glass. Add blended Scotch, lemon juice and syrup, fill with ice and shake well. Strain into an ice-filled rocks glass or a chilled cocktail glass and float Islay scotch on top.

Finally, Lucas chimes in from snowy Toronto with his Garden Caesar (that's a Bloody Mary with a dose of oyster liquor or clam juice to us Yanks). He eyeballs the proportions.

Setting aside the ambiguity of whether the vodka itself is homemade or just the final infused product is, I like the way you think, Lucas. Not just that ambiguity and the plate of oysters, but the nitrous-charged tomato vodka. This is a technique that didn't start getting traction until the last year or so, although it's been known for several years. Lucas uses the technique laid out in the Cooking Issues blog, but explains further:


I do a rough dice with the tomato, making sure to add the juice to the whipper as well. Seal it up, pressurize with two cartridges, wait a minute, depressurize and strain. I like the persimmon tomatoes because they have tons of flavour and live about ten steps away from the bar.

Cheers! Remember, you five, to email me with a shipping address for your copy of The Drunken Botanist and I'll pass it on to the publisher.

For the rest of you, a lot more recipes (worthy entries, one and all) are here in the comments section. Although the giveaway is closed, feel free to chime in with your own, even if they involve frozen squid swizzle sticks (ahem, Greg).
Posted by Matthew Rowley at 10:10 AM