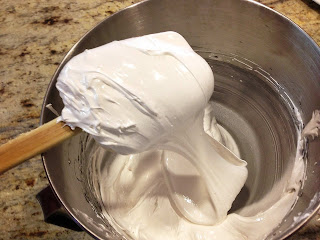 Sticky, fluffy marshmallow creme — sometimes dubbed marshmallow topping or "cream" — can be whipped together in less time than it takes to make a decent cup of hot chocolate. And then, hey, boom, spike that drink with a little whiskey or something stronger and you've got something to put on top of it.

We've discussed real marshmallow syrup before, using actual and esoteric marshmallow plant, but spooning globs of this fake stuff onto hot chocolate, ice cream, milkshakes, or Sundaes is a lot more familiar to...well, nearly everyone.  Legions of American children grew up eating fluffernutter sandwiches, a combination of peanut butter and marshmallow creme, in their school lunches. Some home cooks deploy it as a binder in puffed rice squares and popcorn balls, to add bulk and sweetness in sauces and fudge, and as the base for cake frostings and whoopie pies.

Here's what most home cooks don't do, though: make it themselves and change the base flavor. Vanilla extract is the common flavoring, but why not use mint extract, rosewater, or orange flower water? Pomegranate molasses adds a bit of color and a pleasant bitter note to the sweetness of the glossy white confection. And don't forget liquor: bourbon, absinthe, apple brandy, and dark rums are just the beginning. Admittedly, absinthe-flavored marshmallow creme may have limited uses, but that cup of hot chocolate is a good place to start.

This marshmallow topping can be cobbled together from just a few ingredients common to both bartenders and moms; syrup, egg whites, confectioners' sugar, a pinch of salt, and some kind of flavoring. If you happen to be making ice cream, you may well have those egg whites on hand already. Some confectioners cook a syrup that's a mix of sugar, water, corn syrup, and cream of tartar. You could tie your shoes with gloves on, too, but why make this harder than it needs to be? Let's drop any pretense of this being at all healthy and use straight corn syrup. See below for notes on flavorings.

In an electric stand mixer (such as a KitchenAid) beat the egg whites and corn syrup with the ballon ship attatchment for a few minutes until the mixture is stiff and white. Stop the mixer.

Add the powdered sugar in three stages. Add the first third, turn the mixer on low, then increase gradually to the highest speed until all the sugar is incorporated. Turn off the mixer. Add the second third of sugar and repeat until all the sugar is fully incorporated and the mixture is solid white, glossy, and thick enough to hold thick ribbons that plop off a spoon or spatula.

Add vanilla (or other flavoring) and salt and mix until well blended. Transfer to a one-quart container and store covered in the refridgerator; it will keep for up to three days.

A note on flavorings: A half to a full ounce (1-2 tablespoons) of most spirits should suffice (unless they are strongly flavored — use your judgement), a teaspoon of most baking extracts or cocktail bitters, and just a few drops for strong essential oils such as mint or neroli.