A Whiskey Forge/Tales of the Cocktail Giveaway

Keeping an extensive culinary library in the house means that even when the power dies, I can still work on food and drink projects. The flip side is that paper takes up enormous amounts of space. There comes a point — for me, it's this week — when one needs to weigh wants against needs. See, I'm shifting in fits and starts to electronic versions of some of the library materials and I'm culling printed matter in advance of an upcoming move.

I need the material for work. I merely want it in physical form. But thousands of books, bits of ephemera, and vertical files just take up so much room, so after some judicious scanning, I'm giving some of it away. 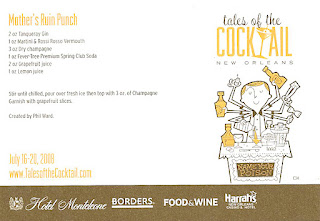 The first thing I'm giving away — right here on this site — is a set of 4" x 6" recipe cards from 2008's Tales of the Cocktail.  To the best of my knowledge, it's a complete set of recipes for all the cocktails served over the five days of sessions, workshops, and panel discussions from that year. Almost 300 recipes. Among the cards are Martin Cate's rum-and-port concoction, the Dead Reckoning. From Pegu Club's Kenta Goto, there's a lovely Plymouth Gin-based La Fleur de Paradis (but note that the recipe calls for ½ ounce of Plymouth, not 12 — an issue we've seen before with genever) and an individual portion of Phil Ward's Mother's Ruin Punch in case you want to ruin any mothers this holiday season.

This stack of recipe cards wasn't available to general attendees, but to presenters and media types. Even if you bought tickets to attend Tales sessions, chances are that you didn't end up with this particular bit of swag.

So how can you score this piece of cocktail history for yourself? Easy:
What's the Catch?
There is no catch. Just follow me on Twitter and let us know about your favorite drinks. You don't have to tweet or re-tweet anything. There's no Official Entry Form, you don't have to do anything about me on Facebook, and you don't have to buy my book. This is just us getting to know each other better. 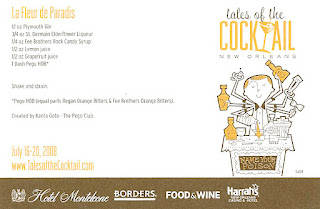 On November 30th, my lovely assistant will pick a winner at random. Because the person to whom I'm giving this set of cards is following my Twitter account, I'll send a message there for a shipping address. If I hear nothing in two days, it goes to the next random commenter. And so on until we have a winner.

"But, Rowley," you may worry. "I'm in Australia. Are you seriously telling me you'll ship it all the way here if I win?" Hell, yes, mate. None of this offer-only-good-in-the-lower-48-states nonsense. I have a few thousand regular Aussie readers — why would I exclude any of you? Same goes for readers in Germany, France, Holland, Thailand, Brazil, Canada, Morocco, or even far away and fabled Kansas. Anywhere. Now, if alcohol is taboo where you live or censors frown on foreign media, the package may never make it past customs agents. That I can't do anything about. In that case, it's just lost.
Posted by Matthew Rowley at 12:36 PM

Labels: library, Tales of the Cocktail

Nice. I don't have any Brown on hand, but there's plenty of applejack and I've been told that there's fresh apple cider from Julian, California en route. We'll just have to swap out with some other bourbon. Cheers, P&A!

My drink is a variation on the Old Fashion. This is something I put together to use a cranberry infusion we made. The infusion is simply a NGS with halved cranberries, macerated for up to a month.
1.5 oz Whiskey (I usually use Rye)
0.5 oz Cranberry
A little water to taste
Simple Syrup
with a twist of orange peal.

I`m all for the Mai Tai first...the one with demerara in it.

Hey you gotta forewarn here when you gonna tweet because i for example follow so many that i don´t get to see everybody´s tweets...

Right now, I'm all about the Little Italy.

There should be some kind of garnish, but that kind of thing is scarce in my house.

I've discovered that I also enjoy Cynar straight. I also recently opened my 2010 bottle of Thomas Handy and think it's wonderful. Neat, with maybe a little water to dial down the heat.

I've been on a ginger lime rum run lately.

Right now I’m having Jamaican rum straight, but here is a bit that’s been a regular around the house (and office) lately.

It’s a Brazilian twist on the Mai Tai. I know, I know.. Tiare makes some of the best Mai Tais I’ve ever had and she just posted the recipe before I did, but give this twist a try. The syrup will NOT disappoint.

Muddle lime in the base of a shaker, add other ingredients and proceed like you would in a regular Mai Tai. Garnish with a mint sprig and a lot of love.

For the Orgeat do Pará, use Rick’s Orgeat recipe but sub the almonds for Brazil nuts. The orange flower water can be left out.

If your Brazil Nuts are as fresh as I get around here you might use less syrup, and add some simple to balance it out.

Switching out the almonds and adding the cachaça brings a whole new character to the drink. The aromatic oils on the Brazil Nuts float to the top and transport you straight to the mountains of Minas Gerais in one snif.

Uai (pronounced jus like “why”) is a very popular slang here in Minas and could mean pretty much anything. After three of these I’m sure you’ll understand what it means.

I do like bourbon just a tad more but lately been drinking rye Manhattans.

ooops, it sent it in before I could give you the recipe

This is my favorite Holiday drink. I don't make it the rest of the year because I'll drink too much of it. I do not add Sprite/7up, I fortify it with lots more Brandy.
(PS - the cards are great but I don't want to win them because I need to clean my house and get rid of stuff too.)

Todd ~ I like the idea of the cranberry infusion to spike your old-fashioned. As the weather turns by degree cooler here in San Diego, cranberry starts to get a stronger hold on my imagination. I particularly like that you didn't call for vodka or grain spirits, but NGS. That's how I tend to refer to the stuff in my own notes around the house.

Tiare ~ This idea of using a high proof Demerara rum in a mai tai is great. Now that Ed Hamilton is bringing Lemon Hart 151 back in the United States, I'm not as hesitant to use my dwindling supply. What is your current favorite brand to use for your high proof mai tai?

Jim ~ I've been a ginger fiend for as long as I can remember. I can't even tell you how much ginger beer we have dispatched making Kentucky mules around here, but we've killed off several gallons of bourbon in the effort. I have just a little bit of ONO left. This sounds like a great use for it before we move. Thanks!

Tony ~ Way to go and taunt the Americans. I think the greatest supply of oak-aged cachaça I've ever seen in the US was in your suitcase in New Orleans. Cachaça aside, I am intrigued by the idea of orgeat made with Brazil nuts. I won't be making it myself since those nuts are about the only food allergy I have. Some people have serious reactions to peanuts: for me, it's these things. So if I ever visit, please don't spring this one on me. There is a certain romantic appeal to dying in Brazil, but, in all honesty, I'd rather do it in my own bed in about 50 years…

Minty ~ Right on about rye whiskey. Of all the damage we've done to the liquor closets in preparation of our move, rye has suffered the most. I bet, Templeton included, we don't have more than 10 ounces of rye in the entire house. We do have, however, vermouth, bitters, and about a gallon of boozy sour cherries that would make a fitting end to those meagre ounces. Prost!

Ruby ~ Welcome! I don't believe I've seen you around here before. Your brandy slush is very much like a frozen brandy punch. I agree wholeheartedly that fortifying the end product with more brandy rather than soda is the way to go. I know this seems like a holiday treat, but how nice do you think this would be served by the pool or out on the porch in the summertime? Thank you so much for sharing your recipe.

Thats difficult. I can only narrow it down to three.
Either a Mai Tai, a well made daiquiri w/ smith and cross or a rye manhattan with carpano.
@millmichk

@Tony, your Ua Tia is something i def will try! REALLY nice take on the Mai Tai.

@Matt - when it comes to high proof demeraras i prefer the Silver Seal which is a private bottled demerara of full flavor and about 120 proof or i use LH151.

Private label, eh? That would explain why I've never seen it around here. Unless I can convince Martin to slip me a bottle of his Demerara, I'm stuck using LH151. Not that that's a bad thing at all…