Root beer cake. Yeah, I know. Sounds like something Ernest Matthew Mickler would've praised. But I stumbled across a recipe for just such a thing while reading Andrew Carmellini's new book American Flavor and it struck a nostalgic chord. I've also been on soda and baking kicks lately as well as preparing to move (we bought a house this week), so anything that reduces the number of cans, bottles, and boxes from the kitchen larder or the liquor closets get boosted to the top of the to-cook, -drink, -make list. 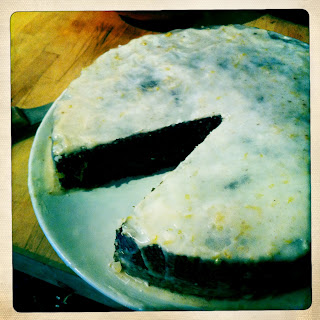 When I said I'd made a root beer cake, the looks at home could only be described as nonplussed. If  I had described it as a dark spice cake or a moist cousin of German lebkuchen, the initial response might've been more enthusiastic. Turns out that the cake is very much like a spice cake, spiked with star anise, cardamom, nutmeg, lemons, and pepper. The top is covered with with spiced glaze flavored with some of the same spices.

Like a spice cake, it gets better on the second day. And the third. I'd make this for kids and to bring along on picnics, but, man, the doughnut potential here is so, so tempting.

A word of warning; the batter is very liquid. You might think something is amiss (especially since the measurements for the cake are odd). Not to worry; it comes out just fine.


To Make the Cake

Grease the bottom and sides of a 10-inch cake pan with some of the butter.

Shake 1 tablespoon of the flour into the cake pan, and shake it around so it sticks to the butter. Tap out any excess flour that doesn't stick to the parchment or to the sides of the pan.

Pour the root beer and molasses into a deep medium-sized pot, and bring the mixture to a boil over high heat. (You need those high sides because the baking soda will froth up very high, and you don't want it to spill over! So make sure there's some meaningful space between the liquid and the top of the pot.)

Pull the pot off the heat and whisk in all the baking soda, so it froths up. Then put the pot right in the fridge to cool down a little.

While the root beer mix is cooling down, whisk the brown sugar, vegetable oil, granulated sugar, ginger, and vanilla extract together in a mixing bowl. The mixture will be a little chunky at this point.

Crack the egg into the bowl and whisk well. The egg is what makes everything come together smoothly: you should have a thick paste. Set this aside.

Pour the batter into the cake pan, put the pan on a cookie sheet (to catch drips and splashes), and put on the middle oven rack.

Bake the cake for 45 minutes without opening the oven at all (this cake will sink if you shake it up while it's baking). Check it: the cake should be high and dark brown, with a little bit of spring-back when you touch it (but not too much-it's a very moist cake), if it's not quite ready, rotate the pan and put it back in the oven for another 5 minutes before checking it again. The whole baking process shouldn't take longer than 55 minutes, even in a slow oven.

While the Cake is Baking, Make the Glaze

Whisk the cream and sassafras together in a small pot, and bring it up to a boil over medium-high heat. As soon as it boils, pull the mixture off the heat, pour it into a glass or ceramic container (something that won't crack from the heat), and put it in the fridge. Let the mixture cool for about 30 minutes while the sassafras steeps into the cream, so you have a nice root beer flavor.

In a mixing bowl, combine the powdered sugar, star anise, cardamom, and salt. Grate in the nutmeg and lemon zest, and whisk everything together.

Strain the cooled cream through a fine-mesh strain into a small mixing bowl (so the sassafras pieces don’t end up in the glaze). 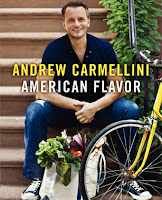 Gently whisk ½ cup of the cream into the powdered sugar mixture, holding back the last 2 tablespoons see if you need it. If the mixture is dry and not coming together as a glaze, add more cream. Whisk the mixture well, until you have a shiny, thick liquid.

To Finish the Cake

When the cake is ready, pull it out of the oven and let it rest for about 5 minutes.

Flip the cake out of the pan onto a serving plate. Spread the glaze thickly on top of the warm cake with a spoon. The glaze will melt and drip down the sides as you slather it on.

You can serve the cake as soon as it's cooled to room temperature-but like all spice cakes, it's even better the day after you make it. Store it covered at room temperature.

Posted by Matthew Rowley at 8:28 AM