Drinking down the liquor cabinets continues. Frankly, our goal is not to drink away the hooch entirely, but to kill off the heels — those few ounces sloshing around nearly empty bottles — so that we don't schlep a lot of heavy glass to the new digs. You'd think, given the imperative to jettison dead weight, that I would refrain as well from canning, pickling, preserving, making ice cream, and like that. 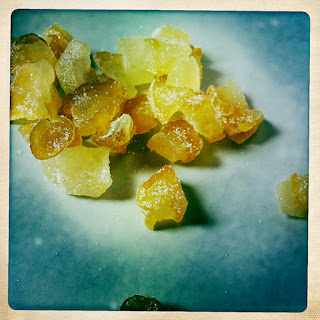 When I stumbled across a stash of the bizarre Buddha's hand citron last week, though, I seized on the opportunity to crank out one last batch. Unlike citrus fruit with which we are most familiar, Buddha's hand citron is not even vaguely spherical. It has color you'd expect in a lemon, but the shape is more like a cuttlefish or squid. Those with a penchant for old horror stories might find it resembles the tentacled head of HP Lovecraft's monstrous Cthulhu rather than the hand of anyone, but there you go. Known more properly as Citrus medica, the Buddha's hand or fingered citron, is striking not just for its bizarre appearance, but its strongly fragrant zest. Unlike the pith of lemons, grapefruit, or oranges which can add a distinct bitterness some dishes, this variety is edible pretty much as-is.

But it also takes to candying very well and, since plum pudding season approaches, I wanted a stash of candied citron so that if I catch a wild hare and decide to make plum puddings this year, I'll have the  most elusive ingredient. It will also undoubtedly find its way into breakfast scones and accompany the occasional afternoon tea. 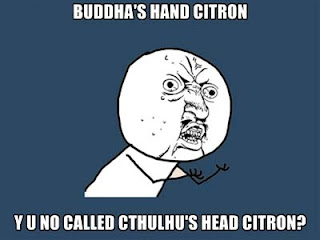 I started with 2 pounds of fruit but the directions below are easily adaptable for whatever amount you may have. Don't be surprised if you don't find any pulp inside. In fact, there probably won't be any at all. If you do happen to find some, simply slice away for this recipe.

Wash the fruit well, trim any greenish or brown spots, and cut into half-inch cubes — including all of the pith and all of the zest. Place them in a large pot and cover with cold water. Bring the water to a boil, reduce to a simmer, and cook about 30 to 45 minutes until the cubes become translucent. Drain the blanched fruit and return it to the pot.

Add 2 ¼ cups of sugar and 1 cup of water. Repeat until the cubes are completely submerged.* Bring the mixture to a boil over high heat, then reduce it to a low simmer. Cook, without stirring, about one hour. You're looking again for translucency. Turn off the heat and let the poached citron cubes remain in the syrup covered overnight until cool.

The next day, strain them from the syrup (don't throw out the syrup) and arrange on a cookie rack set over a lipped tray to catch any syrup that drains from the pieces. Allow to dry at room temperature for 2 to 3 days until the pieces are dry to the touch. Toss them with granulated sugar and seal in an airtight container.

You can, if you want to speed the drying a bit, train a fan on the candied cubes. Do avoid drying them, however, in the oven since this may result in something more leathery than tender and supple.

I haven't yet decided what I want to do with it (except, obviously in, cocktails and perhaps desserts) but this recipe yields about 5 cups of fragrant citron syrup. Gingered citron lemonade is as good a place to start as any...
Posted by Matthew Rowley at 3:10 PM

nice recipe! I once did something like that, the final product was sweet, lemony and chewy. Well, Buddha's Hand Citron is great in creme brulee, too. It has a sweet spiciness (kind of jasmine topnotes and some kind of fruitcake spice undertones) that blends really well -- I use it where I want the brightness of citrus without the overt character of lemon.

Thanks Randall ~ I've enjoyed Lovecraft stories since I was a little kid. I think he must've had something to do with my early tendencies towards a precocious vocabulary. Maybe I can use the syrup from this recipe in a R'lyeh Sour.

A Buddha's hand crème brûlée sounds fantastic. I would hop all over that. And you're right about imparting citrus tones without the sort of brashness of lemon — the effect is familiar, but somehow slightly exotic. Agreed about the jazzman notes to it, but I'm also reminded of bergamot, especially after I dosed some hot black tea with it yesterday morning and was instantly reminded of Earl Grey.