Thursday Drink Night happens, more or less, once a week on...um, lemme check. Yep. Thursday. Celebrants sometimes gather in person, but it's more of an online deal in which cocktail bloggers, spirits writers, bartenders, and drinks enthusiasts fire up their computers, chat with each other, and mix cocktails based on a theme or a particular spirit. This week, the theme is tiki...with a twist. 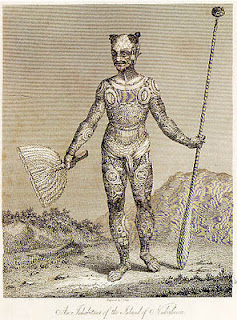 From the Mixoloseum blog regarding tonight's Thursday Drink Night:

[The] theme will be “Nuku Hiva” based on recent events on that tropical Polynesian island. A little back story:


In early October, the charred remains of a German adventurer were discovered at a campfire site on a South Pacific island. The tabloid media were quick to portray the slaying as a possible case of cannibalism on Nuku Hiva, an island historically known for human sacrifice. But locals are offended and experts say such killings are a thing of the very distant past. (read more)

Therefore, in honor of this darkly exotic mystery, the goal of the night is to create tiki drinks with at least one German ingredient! Bonus if you use fire!  Stop in to the chatroom after 8pm EST for all the fun and frivolity.

Posted by Matthew Rowley at 9:11 AM