Years ago, I knew a guy who sold caviar: Ossetra, Sevruga, and Beluga, as well as plump red salmon eggs, Tennessee paddlefish eggs, whitefish roe, tiny grains of tobiko, and more. He even imported Scandinavian kelp-based pellets that, given dim light and enough aquavit, might come off as caviar-like. That inky kelp imposter notwithstanding, his fish roe was good, he cared about keeping it under the right conditions, and, when you recall that lightly salted fish eggs are a luxe dish in the first place, his prices were reasonable. 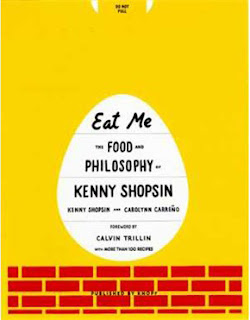 I learned a lot tasting his products. I learned that I prefer Ossetra to the more expensive Beluga; that salmon roe less than excellent is shudderingly vile; and that Southern paddlefish roe — while I wouldn't mistake it for the Caspian Sea article — is worth tracking down. I also learned that the contents of his carefully packed tins were not always what the invoices declared.
Oh, if you were a regular, you’d get what you ordered as long as he had it in stock. Most people did, in fact, get what they ordered. The owner of a football team who regularly had big tins of Beluga shipped to him certainly got the real deal. But if the Caviar Guy was out of something and he thought he could get away with it…well, the Sevruga sometimes shipped out with a definite Tennessee accent.
I hadn’t thought of that asshole in months.
But the memory of him and his various cons washed over me when I was reading Kenny Shopsin’s book Eat Me. Shopsin, the Greenwich Village cook and subject of the documentary I Like Killing Flies, writes about Morris, a purveyor from whom he used to buy turkeys:
One day Morris was bragging to me that he had been on that corner for fifty years. Way back in the ‘40’s, he said, chicken was really rare. When he couldn’t get it, he used to take veal cutlets and sell them as chicken cutlets. He said nobody ever noticed the difference. I don’t know how he expected to inspire trust in me by telling me he sold veal for chicken. He was telling me the story to show how times had changed, but what I got from it was that he was a liar and a crook.
I had seen I Like Killing Flies a few months ago, but the strength of that passage right there is what made me buy the book. It told me that Shopsin didn’t just understand the extent of the sneaks, cons, cheats, and shorts endemic to the restaurant business, but that, like him or not, and despite his protestations to the contrary, he was one of the good guys. 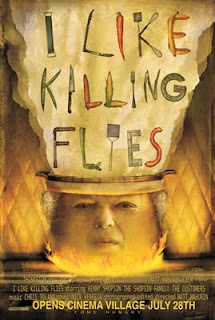 His own restaurant, Shopsin’s, was a New York institution for decades. It's since closed and he's moved on to a new, smaller location on Essex Street. While I knew it existed at the original spot, I always got distracted when I was in New York and never visited. Pity. The menu was about 900 items long and the dishes were, well, not classics since so many bore Shopsin’s own imprint on what they should be, but they were familiar — pancakes and French toast, but also Mac and Cheese Pancakes and Bread Pudding French Toast. Not just ho cakes, but Slutty Cakes as well. One mugshot lineup of griddle cakes in the book includes varieties such as chocolate peanut butter, coconut, cinnamon raisin, oatmeal, cranberry orange, brown sugar banana, bacon, chorizo corn, and a few more. Shopsin is particularly good at running with a basic concept.
The recipes are strong on breakfast foods — or, at least, the sorts of things I like to eat for breakfast. But there are plenty of salads (“I think a lot of salad eaters are dishonest people — people who eat for reasons other than sating their true desires.”), soups (“I put something like forty soups on the menu all at once, and from there I kept adding them, one at a time or ten at a time.”), and sandwiches (“In addition to sliced roast beef, turkey, shit like that, I also had pork loins, smoked ham, bacon, Canadian bacon. You could get roasted chicken, grilled chicken, fried chicken, red onions, grilled onions, fried onions, fresh tomatoes, roasted tomatoes, sun-dried tomatoes, fried green tomatoes.”).
Shopsin’s writing is vulgar, opinionated…and sounds a lot like me in my own kitchen.
Here’s his take on an orange drink I myself had seen when I was a kid, but was never allowed to have:
“Orange Julius”
When I was a kid, Orange Julius was strictly a California thing. I didn’t discover it until late in life, and then I fell completely in love with it and had to have it at my restaurant…Legally speaking, I am probably not allowed to call this an Orange Julius because the name must be copyrighted or some crap like that, which is why I put the name in quotation marks. I could have called it an Orange Julius-ish. Or maybe I can get away with it if I just say that this is my idea of what an Orange Julius is. The truth is that mine is different from the original. It’s better because we squeeze the orange juice fresh.”
1 cup fresh orange juice
1 tablespoon powdered egg whites
½ cup powdered sugar
2 cups crushed ice (or 3 cups ice cubes)
Put the orange juice, egg whites, and sugar in a blender and blend quickly to combine the ingredients. Add the ice and blend until the ice is finely crushed and the drink is frothy. Do not overblend, or the ice will begin to melt and the drink will start to flatten.
Kenny Shopsin and Carolynn Carreño (2008)
Eat Me: The Food and Philosophy of Kenny Shopsin
Knopf
ISBN: 0307264939
$24.95
Posted by Matthew Rowley at 11:03 AM