Even though one of my Irish grandfathers' families hails from Cork, a city known for its appreciation of offal, and the other from County Mayo, my wurstlust is traceable to another side of the family entirely.

As a child, if I were particularly antsy, my mother would rebuke me with an exasperated "Sitzt du!" and I would know to sit and immediately unfuss myself. Asked what I wanted for my birthday dinners, I declared the tedious "rouladen" more often than she probably liked to hear, and in my grade school, I was one of the only children — certainly the only freckled one — who toted Braunschweiger and mustard sandwiches for lunch. To this day, if you startle me, you're as likely to get a German expletive as an English one. 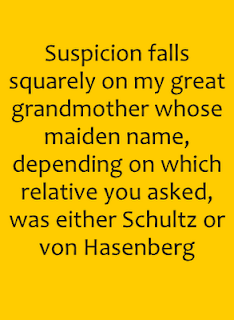 The unavoidable conclusion is that somewhere in the woodpile lurks a beer-drinking, sauerbraten-making, spätzle-simmering subject of the Kaiser. Suspicion falls squarely on my great grandmother whose maiden name, depending on which relative you asked, was either Schultz or von Hasenberg. As a small child, I once asked why some of our cousins had German names. She konked me on the head with the back of her hand and chided me. "We are not," she insisted, "German. We are Prussian." Years later, I think it may have been a joke...but, then, Lily von Hasenberg (if that was her real name) was not known for levity, so who knows?

That Braunschweiger above is a spreadable pork liver sausage, a subcategory of the wider liverwurst clan, and one likely to be found at family gatherings at my great-grandmother's massive lawn parties in the 1970's. To be honest, the kids generally eschewed it; those who didn't like it really didn't like its mineral bite. To me, though, it was one of the perks of no-class summer diversions. Broadly, Braunschweiger — known as BS to some of its admirers — is ground pork liver mixed with finely ground bacon, stuffed in hog bungs, simmered, then smoked. Because lately I've been both on a liverwurst kick and struck with bouts of insomnia, I've been digging up recipes that elucidate the whole category of liver sausages — and make sense of my childhood snacking.

On a hunt for Braunschweiger recipes in particular, I came across one in my library for "Leberwurst" from Elise Hannemann's 1904 Kochbuch. The book is dedicated to Hannemann's patron, Ihrer Majestat der Kaiserin ["your Majesty the Empress" (i.e., Augusta Victoria of Schleswig-Holstein, wife of Kaiser Wilhelm II)] and is a revealing look at middle class German cookery in the years before World War I. Although Hannemann does not call this particular sausage "Brauschweiger," the bacon and optional smoking would make recognizable to American Midwesterners as exactly that.

My somewhat free translation is below. Following that is my transcription of the original — as always, feel free to correct my translations. The original recipe's Fett- oder Krausedärme refer to slightly different natural hog casings. Those sold as 2.5-3-inch "bungs" (no snickering) in the US are just fine for a finely ground and simmered sausage like this. Wurstkräuter are simply herbs and spices for seasoning wurst. Although Hannemann doesn't specify, white pepper, marjoram, nutmeg, allspice, and even cloves would not be out of place. Start with a 3/8" plate, then grind twice more with a 1/8" plate.

Very Good. In winter, it will last three weeks.

Run the liver and bacon through a grinder three times, then thoroughly mix in the herbs, salt, pepper, finely sliced truffles or chopped anchovies. Stuff this mixture loosely into hog bungs and let cook slowly for a half an hour* in boiling water. Then remove them immediately place in cold water.

The sausage for slicing and is especially good if they are smoked two days.

*Note that some modern authorities suggest cooking liverwurst until its internal temperature is 165°F.

Transcript of the above image:

Posted by Matthew Rowley at 8:06 AM

My grandparents (German, both sides -- of course, my surname makes my father's heritage pretty evident) ate braunschweige quite often when I was a child.

The best I can say is that I didn't hate it. Although I preferred it in the form of a dip, with cream cheese mixed in.

I've often wondered whether I'd like it more as an adult than I ever did as a child. Hm.

I think maybe the opposite is working for me, Mike: as an adult, I don't like Braunschweiger as much as I did when I was a child. I still like it in small quantities, but to wolf it down as I did when I was a kid? Blech — Took me forty years, but I finally understand what my grandmother meant when she would say that a certain dish was "too rich." "Yeah," I used to think "It tastes great." Turns out that a pound of liverwurst or Braunchsweiger might be too much even for me on one sitting.

I dug this up to send the link to a friend, and I *just noticed* the Clicken Sie Hier. Well played. I literally lol'd.

I plant little Easter eggs troughout this blog mostly for my own amusement. It makes me happy, though, when someone else stumbles across them. Glad I could give a laugh.