It is often asked of me:
“ When did you first begin making candy?”
And I am obliged to say
I cannot honestly remember,
for as children we were allowed
all the candy we wished,
provided we made it ourselves
—and thus made sure of its purity. 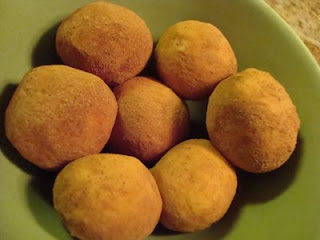 Though some home confectioners do make mashed-potato candies, there isn’t a spud to be found in this Pennsylvania candy. Turns out, it’s not all that Irish, either. But this time of year, Philadelphia is besotted with little round coconut candies that, once rolled in cinnamon, do look a bit like tiny taters.

For those Philadelphia expats who treasure the faux little tubers but don’t have access to them, I’ve put together two recipes that use common ingredients and one for more professional kitchens. See? It’s not all about beer and whiskey for St. Patrick’s Day (though if you poured a wee drop of spirits while making them, who’s to know?). 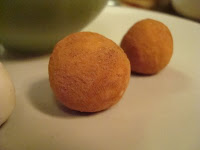 A recipe from the days I lived in Philadelphia and worked behind the scenes at the Mütter Museum. How can I tell? Well, two ways: Irish potatoes are a solidly—though not exclusively—a Philadelphia-area confection, probably a relic from the days when the city’s sugar refineries pumped out a third of the sugar used in the US.* Though rum is not strictly a traditional ingredient, it doesn’t make a hateful addition.

Cream the butter and cream cheese in a stand mixer with the paddle attachment. Add half the sugar, mix, scrape down the bowl, then add the rest and beat until smooth. Add the vanilla extract, coconut, and rum (if using). Mix to blend. Cover with plastic wrap and refrigerate one hour to stiffen the mass. Roll into small balls about ¾” across. Roll in cinnamon, shake off excess, and store in an airtight container. 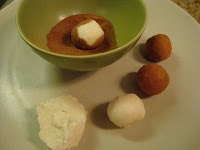 Note that these benefit from a day’s rest at room temperature to allow the flavors to merge and the raw taste of the butter to mellow.

* How else can I tell? The Mütter is a museum of medical history and pathological anatomy. I spent a great deal of time analyzing skeletal remains as part of a repatriation program to determine which remains in the collections were Native American and which were not. My original notes for forming the sweetmeats called for rolling them into small balls, “slightly smaller than a defleshed distal thumb phalanx.” Work, clearly, was on my mind.

This is a recipe from a Philadelphia friend who uses fresh cream in her version, though she advises storing them in the refrigerator until an hour before serving.

Mix all dusting ingredients in a small bowl and set aside.

Finely chop the coconut in a food processor. Add the other ingredients and pulse until it forms a mass. Roll out 1” balls of the mixture and set aside for an hour in the refrigerator to firm. Roll each small white center in the dusting, shake off excess, cover, and store in the fridge.

W.O. Rigby has an unusual take. Most recipes and commercial examples call for coconut as de rigeur and the small size is taken for granted. His 1920 recipe calls for almond and bon bon cream and are substantially larger, suggesting something more similar to the Christmastime marzipan confections we see in German and French confection traditions.

Take five pounds of bon bon cream and into knead one pound of almond paste, stiffening it with XXXX powdered sugar while working, if necessary. When thoroughly kneaded, shape into small spuds about the size of an ink bottle, and while moist rub with powdered cinnamon. Use almond paste or pignola nuts pressed in sides to represent eyes or sprouts, or simply make little dents for the eyes. Care must be taken to get the cinnamon to stick good.

Matt- up here in Maine we actually have a potato candy. They're called Needhams and are similar to a Mounds chocolate/coconut bar but with the addition of potato to the coconut which makes for a creamier filling. They aren't made commercially by any large candy makers, but several artisanal ones make them. They are basically a home candy recipe given as gifts and for guests and family at the holidays.

Jonathan ~ I'd read about Needhams before, but have never had one. I'd assumed the name is a play on "need thems" a bit like S'mores is a contraction for "some mores"— but do you know anything about the history? Am I missing out on some little hamlet named Needham or maybe an 1870's candy maven named Agathe Needham?

I was planning to make these or Needhams this year after a friend sent me a link to one company's "Irish Potatoes" (O'Ryans, I believe). Thanks so much for sharing the recipe!

My pleasure! They're probably one of the easiest candies to make at home. I like one or two at a time (my sweet tooth seems to be losing its edge) with a cup of hot tea and the morning's news.