Bill Owens, the silent Bill Owens, the one who’s not talking, can give the impression of a passively curious man. He watches. He listens. Sometimes he peers over steepled fingertips or takes a quick note. But when that mouth opens, a dawning sense of mania begins to take hold. Owens is seized with a fever for, among other things, craft distilling.

Avalanches have caused less confusion than the flurry of words, notions, and half-formed plans that leap from his tongue. “You know what somebody ought to do is…” and he’s off again, ideas tumbling one after another down a steep slope of logic until somehow, at the bottom, he’s convinced others that they are just the right people to implement his ideas. 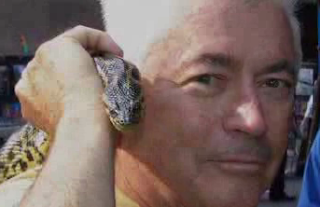 Owens is president of The American Distilling Institute and from his office in Hayward, California, he’s emailed and called most every commercial distiller, rectifier, and merchant bottler in the United States. He is an indefatigable proponent of artisan, small-volume distilling. In a series of roadtrips, he’s traveled tens of thousands of miles, visiting as many craft distilleries as he could, meeting distillers, taking photos, making short videos, and convincing a lot of them that his organization ought to be the voice of artisan distilling.

As ADI takes on that mantel, Owens’ influence becomes apparent—undeniably at the center, he is surrounded and in touch with distillers, interns, manufacturers, and journalists across the United States who pick up the challenge of “You know what somebody ought to do is…” Then they do it. They form committees, they set up a website, they write for his magazine Distiller, and they lobby legislature for tax reform on distilling.

Some of the ADI’s activities include an internship program for aspiring distillers to pair with more experienced mentors in the field and working to define micro-distilling though the ADI Forums with input from artisan distillers around the country so that the practitioners may define their craft before legislatures do. 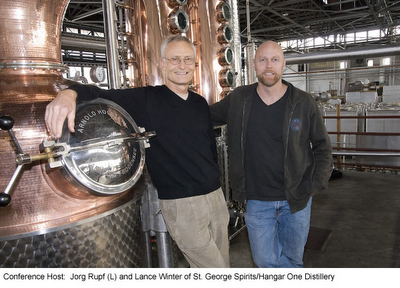 But the big event of the year—the one that brings so many distillers face-to-face—is ADI’s annual distilling conference. This year’s theme is brandy and is hosted at St. George Spirits in Alameda, CA. You can bet I’m going to be there. With 40 craft distilleries represented at the conference, there’s rarely a better time to get an insider’s take on the industry and where it’s headed.

Other events:
The full schedule is here.

What: The American Distilling Institute's Brandy Conference
Where: St George Spirits/Hangar One, Alameda, CA
When: April 3-7, 2009
Cost: $500 for the conference. Extra events additional (see above), but an extra person may register for $350

Regrettably, I won’t be in on the workshop. I’m sure Bill will find something for me to do.
Posted by Matthew Rowley at 2:19 PM

I'm unfamiliar with this person called Silent Bill Owens. I only know his twin.

Wayne, he is a magical, near-mythical creature. I once saw him while I was talking to a room full of people at Tales of the Cocktail. Watman can verify: he was there and must have seen Silent Bill, too.

At anytime the evil twin is being silent, it is the human (or whatever you call it) equivalent of a large caliber machine gun being reloaded with another huge and very loud box of ammo.

Yeah, I was there. He was silent for a good stretch. I'd say, 35, 40 seconds at least. After that it just looked like he was silent because he was whispering in my ear and writing me notes and goading the fellow from Absolut about how everything is made out of the same Nuetral Grain . . .

I was wondering about the silent Bill as well. i never met him