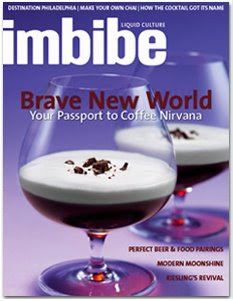 Giving bottles of homemade liquor
is one of the best presents I’ve ever found...

~ "Ben"
anonymous Seattle home distiller
I've been away in New Orleans for a week, but today am catching up on all kinds of good things.

One of those is the March 2009 issue of Imbibe. Paul Clarke's "New Moon Rising" article is a pretty dead-on discussion about the increasing popularity of secret distilling among American spirits enthusiasts.

Nicely done, Paul: Whether it's called moonshine, home-distilling, or "nano" distilling, it's impossible to cover every aspect of the subject in a single article (or even a 90-minute presentation). A lot of journalists still fall back on old truisms and stereotypes about extra-legal distilling that just don't hold the water they used to. This is one of the few times I've read something recently that actually reflects the quiet trends I've been seeing in the field for the past two decades.

That's not just self-serving because Clarke quotes me. He also talks to Mike McCaw, co-founder of the Amphora Society, to several unlicensed distillers striving to make high-quality spirits under the radar, and to Joe Michalek, president of Piedmont Distillers (whose Midnight Moon and Cat Daddy spirits both draw on Southern moonshine traditions), and Ralph Erenzo of Tuthilltown Spirits whose Old Gristmill Authentic American Corn Whiskey relies on an heirloom variety of corn that's otherwise not commercially available in the US.

Clarke also covers the topic with some additional information over at the Cocktail Chronicles. Go check 'em out.