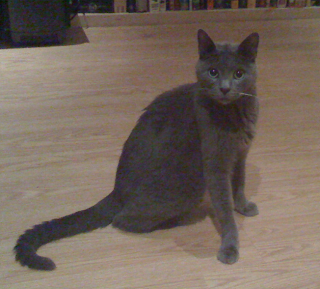 Earl (c.1994-2008), a grey domestic shorthair cat, was found dead Saturday, November 8th after a brief and wasting illness in San Diego, California. He is survived by Rowley and Morpheus, neither of whom particularly likes cats, but both of whom were inordinately fond of this one.

We picked up Earl at a Philadelphia animal shelter when he was about three years old and slated for euthanasia. For the next eleven years, he was our constant and pathologically affectionate companion who nosed his way into laps, onto chests, under blankets, and anywhere a warm body would tolerate him. He was practically a poster critter for the argument that—with attention and care in a good home—shelter animals respond with seemingly boundless love.

He was as dumb as a trunk of mittens. He cried incessantly in the morning when he wanted to be fed, even when his bowl held plenty of food. As often as not, he came away from the litterbox smuttynosed, with four or five grains of litter stuck to it. The pronunciation of his name bedeviled our friends from Colombia and Mexico who didn’t get the feeble and unoriginal pun of naming a grey cat Earl. At bedtime, he went completely apeshit, running through the house, sliding into walls and attacking feet, paper, and gym bags with his soft little clawless paws. The only trick he almost mastered was not to go outside when we left the door open.

But he was our cat and we loved him.

I’m writing this in North Carolina, en route to a two-week gig in Florida. The hours will be long and will not lend themselves to posting much here. Once I’m home and back to my bars, I’ll toast him with that New Orleans obscurity, the Obituary Cocktail. For this, I’ll finally crack open my single bottle from the first commercial run of Lance Winters’ St. George absinthe. I'd been saving it for a special occasion. Now seems right.

Stir well with cracked ice until, like an earthquake, the drink turns opalescent; strain into a chilled cocktail glass. I don’t garnish much and neither should you. Certainly not here.

Failing that, I’ll go full-bore maudlin Paddy on him and break out the Irish, neat.

We miss you, old man.

That's rough, Matt -- my condolences. I picked up two scraggly kittens in 1992, siblings; the female passed last year, and her brother, I'm now coming to accept, may not be with us much longer. I know where y'are.

He was a character.

Hey guys ~ Thanks for the kind words. Leaving town the day after he hit the Big Litterbox in the Sky was rough, but diving into work has been a good way to refocus on other things.

Paul: good on you for scooping up the two scraggly kittens.

And D: I suppose it's safe to have glasses of milk around the House of Bamboo now that he's gone. Otherwise, you'd run the risk of a rude little paw inserted into your glass.