When you consider that brown liquor
defined my childhood as much as, say,
snow days and sunburns did,
my predilection for the Sazerac
begins to look predestined.

~ Sara Roahen
During Tales of the Cocktail this past July, Mike McCaw and I mosied up to a table where a lithe young woman was talking to all comers and mixing Sazeracs and brandy old fashioneds for any who cared to sample. Bottles of brandy, whiskey, bitters, and the local anise spirit Herbsaint were at the ready, though running low, as the hordes of reveling attendees wound down Cocktail Hour.

Suddenly, she went wide-eyed. “Oh my gosh! Did that guy just steal my book?” Sure enough, the russet-and-red hardback she had authored with its cover of a time-worn cocktail sign was now nowhere to be seen, nor was the unsteady admirer who had been thumbing it moments before. That week, with the Hotel Monteleone was awash in premium swag, some thieving cad absconded with Sara Roahen’s personal copy of Gumbo Tales.

Just because the thief was in his cups doesn’t mean he was wrong. In fact, he might have made off with one of the choicest take-aways in the hotel. If New Orleans has ever been good to you, then take his lead and beg, borrow, or steal buy a copy of Gumbo Tales without delay.

Roahen, a Wisconsin transplant, has proven her food chops—as a line cook, restaurant reviewer for the New Orleans weekly Gambit, board member of the Southern Foodways Alliance, and, tenaciously, in her attempts to trace Wisconsin’s brandy old fashioned cocktails back to the Sazerac through an anonymous Mississippi riverboat captain.

She has written a book at turns both gut-wrenching and bust-out-loud funny about finding her place at the New Orleans table (and, apparently, not a few bars). In the process, she wrestles with defining gumbo, boiling live crawfish, the city’s seeming disinterest in vegetables (unless breaded, fried, cooked down, or dressed up with crab, ham, sausage, and cheese), its cult-like following of Hansen’s sno-balls, its robust St Joseph’s Day feasts, po-boy sandwiches, and an influx of newcomers, learning how and why, as she does, to remain in that postdiluvian city.

Those of us interested in the drinking and food cultures of New Orleans savor classic cookbooks such as Lafcadio Hearn’s 1885 La Cuisine Creole for shedding light on the origins of creole cooking. Others help explain the growth of both creole and Cajun cookery, such as Paul Prudhomme’s 1984 Chef Paul Prudhomme’s Louisiana Kitchen or John Folse’s recent encyclopedic tomes on South Louisiana cookery (all of which, by the way, contain an abundance of recipes for alcoholic beverages, sips, and nips from absinthe drips to brandy milk punches). 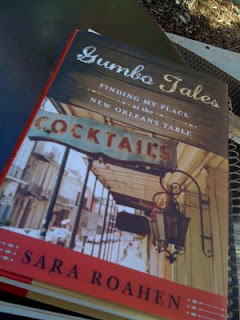 Roahen’s book belongs on the same shelf, though it is something else. For one, it has no recipes. Like the city itself now, Gumbo Tales is defined by what some have called the federal floods, but which many just call Katrina. Here, the floods are both a lens for examining, and a touchstone that unites, everyone with connections to the city.

Katrina doesn’t mean just the 2005 hurricane itself, but also its evil twin Rita. It means the broken levees, the flooding, the deaths, the harrowing devastation, the political ineptitude, the broken families, and displaced lives that followed the storm and which continue to affect daily life in the city. All of that is enough to make even courageous constitutions turn to drink.

Listen to her take:

Earlier this week, from my car, I saw a man walk past a water-stained sofa that someone had hauled to the curb weeks ago. He got a few feet beyond it and then doubled back to arrange two of the sofa’s cushions that had gone askew. My throat tensed at this small gesture toward fixing our overwhelming mess.

Your throat may tense while reading Gumbo Tales, too. Mine did. It also prodded me to mix a Sazerac, made my mouth water, my stomach growl, and the walls echo with belly laughs as she readily points out her own foibles and outright lies:

No one but my kindergarten teacher flinched when at six years old I mentioned my desire to become a cocktail waitress when I grew up.

Or, in an effort to convince a reluctant Vietnamese restaurant owner that she was a seasoned trencherman:


I eat duck blood all the time.

Most of her followers do not want to date Ashley Hansen. We want to be her.

Some have said “Let New Orleans sink. It’s their own fault for living there.” The first chapter alone lays open that imbecilic rationale that could only be meant by those who’ve never been or, having been, never left the French Quarter and who know it only as a modern Gomorrah of tacky t-shirts, cirrhotic livers, hustles, and corruption.

To think that way is to say that humans are all teeth, toenails, and elbows. Yes, of course, we have those things—and what would we be without them?—But that’s so laughably far from reality nobody could seriously believe it.

Intentionally or not, the book is an eloquent argument for why the Crescent City is worth saving. Even after the storms, it remains one of the most vibrant cities in the United States (I’m not unbiased: my own mother recently referred to the place as “your beloved New Orleans” so take my endorsement with a grain of rice). Read the book, but when you’re done, put it away and high-tail it to New Orleans. Go for the first time, go for the tenth time. Just go.

Though she denies Gumbo Tales is a guidebook, a newcomer to the city or an inquisitive visitor who wants to get to know the place more intimately than a casual conventioneer does could do worse than to get a map, a highlighter, and a notebook to mark out, neighborhood by neighborhood, a hit list of po-boys, sno-balls, esoteric cocktails, bakeries, miscellaneous eateries, and watering holes.

New Orleans is one of the world’s great culinary destinations because of the people who love it so much. Roahen nailed it when she writes that people love the city as they love a person. And few have captured its residents’ obsessions with eating and drinking more poignantly and lyrically than a transplanted Midwesterner who has embraced the New Orleans table with the zealotry of a convert.

Sara Roahen has found her place.

Wow! The whole review is a great read in itself.
Great quotes.

Total tangent: the book thief episode reminded me how much I underuse "cad".
Recently I was reminded by another moral reprobate of my underuse of the lovely term "moxie". That reprobate recently ran, unsuccessfully, for the office of vice-president of the United States.

Glad you liked. That is actually the pruned version: my notes went on for 12 pages.

re: Moxie. I once accidentally took of swig of that gentian-tinged soda thinking it was root beer. At the time, my appreciation for bitter tastes was not as developed as it is now and its gagability quotient was so high that it ended up on the ground. Who knew we'd see that little vignette played out on a national stage?

Haven´t got this book yet but believe me i will.

Btw i get mad when people say New Orleans should sink, it´s so damned ignorant.

As New Orleans' unofficial counsel to Stockholm, I think you should definitely get a copy of this one.