Hulabilly Lemonade: The Fireflies Won't Be the Only Ones Getting Pleasantly Lit

Tiki Oasis is in full swing again. Regular readers know that for several years now, I've made a point of attending the four-day extravaganza of rum, beehive hairdos, Bettie Page lookalikes, surf tones, and tiki madness in San Diego. This year the theme is Hulabilly. Otto von Stroheim, the founder of TikiO, invited me to give a talk. So yesterday afternoon, we filled a ballroom, threw up some slides, hit the sauce, and delved into my field: illicit liquor. 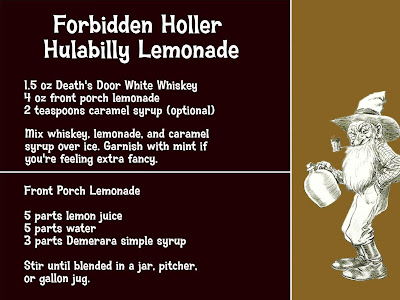 Over the next few weeks, I'll add some more stories from that talk, but I had so many requests for my boozy lemonade recipe yesterday that I realized I should put it up while the hulabilly hodown was in full swing.

Johnny Jeffery flew in from Wisconsin to join me for the talk since he was the distiller for one of the whiskeys we were tasting: Death's Door white whiskey. Jeffery is in the privileged position of sampling his white white right off the still. His recommendation for the rest of us who can't get it at quite such high proof? Try it in a margarita.

The Hulabilly Lemonade I made as a welcome drink for the crowd is a twist on an old-fashioned front porch lemonade…with two differences. The first is that I used two sugar syrups — one demerara and the other caramelized, which isn’t as sweet, but gives the drink a soft, almost praline note that complements the fresh lemon juice. The second is that I asked the volunteers helping out with the talk to pour in a whole bunch of whiskey.

Without the whiskey, the lemonade makes a good Arnold Palmer when mixed 1:1 with black iced tea. With whiskey, though, and cooling off on the porch some hot evening with a pitcher of this Hulabilly Lemonade and a few glasses…well, let’s just say that the fireflies won’t be the only one getting pleasantly lit.

Mix whiskey, lemonade, and caramel syrup over ice. Garnish with mint if you're feeling extra fancy.

Stir until blended in a jar, pitcher, or gallon jug.

A note on the caramel syrup: In my opinion, the caramel syrup really makes this shine, but it's not strictly necessary — you could leave it out entirely. It not just tastes good, though; it's a nod to old-school bootleggers who sometimes faked age in illicit spirits with caramel (a practice that hasn't died out). Author David Lebovitz has good notes on making caramel; if you've never made it, check them out before you begin. The way I make this cocktail syrup, it's a simple ratio: two parts sugar to one part water so that the final version — by volume — is 25% more than the original sugar volume. First, measure whatever quantity of plain white table sugar (12 ounces by volume is a handy amount for home use). Then measure half that of water (6 ounces in this example). Have it at the ready.

Slowly caramelize the dry sugar in a deep, heavy-bottomed pan (I use an unlined copper pot, but use what you've got). When it reaches a rich amber color, immediately (and carefully) pour in all the water. Be careful: it will spatter and steam. The whole mass will seize up in a hard candied blob. No worries. Turn the heat to low, stirring now and then, until the sugar dissolves. Some water will have evaporated as steam, so when the whole thing is liquid and cool, put it in a measuring cup and add just enough water to make the total volume 25% more than the original volume of sugar. In this example, 12 ounces (100%) plus 3 ounces (25%) = 15 ounces. Just top off with cool water until the total volume is 15 ounces. Easy peasy.

I also find that Death's Door makes a pretty good version of a Mojito. Makes a taster drink than most white rums, except Rhum JM white, that stuff really deal!!