Since the 18th century, Hubert Germain-Robin’s family has been in the distilling business. The Frenchman has carried on the tradition in northern California where, in the early 1980’s, he co-founded Germain-Robin distillery, now known for exemplary brandies. His first name has become so enmeshed with the rise of American craft distilling that, like Beck, Coolio, or Divine, no other is needed. To those in the know, there is but one Hubert. 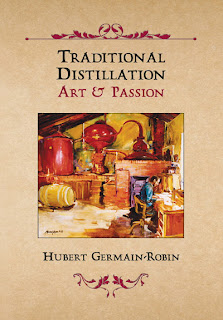 Traditional Distillation: Art & Passion brings together his insight gleaned from decades of making eaux de vie both in France and California. With 18 pages devoted to the anatomy and operation of the Cognac pot still known as an alambic charentais, the book is less a step-by-step instruction manual for distilling spirits than it is a gentle guide for readers with at least a rudimentary understanding of stills. Hubert does not merely dispense technical instructions on distilling; he discusses the reasons a distiller may choose — or not — to take particular actions. “Remember,” he exhorts, “With distillation you cannot go back. You will have to live with what you distilled.”

Like an avuncular Sun Tzu or Baltasar Gracián whose 17th century Art of Worldly Wisdom advised readers on flourishing with honor in a duplicitous world, Hubert structures much of his book on maxims. He advises not simply “do this” or “don’t do that,” but why one course may be preferred to another, all the while urging readers to balance honesty and humility with vigilance, observation, discipline, and common sense. Distilling, he makes clear time and again, is a subjective adventure, the success of which depends on the distiller’s vision.

With sections on vinification, cleaning a still, tasting spirits, and the origins of defects in spirits, Traditional Distillation gives both broad notes (“Be truthful in your criticism. The first impression is usually the best.”) and specific directions (“Don’t do any cleaning during the obtention of the EDV, due to the ability of alcohol to absorb odors.”). When more seasoned distillers are sometimes accused of hoarding hard-won knowledge, here is an earnest attempt to share a wealth of personal and practical experience.

The real art of distillation is, as Dan Farber notes in the introduction, at the heart of conversation between distillers. Hubert has given a gracious opening to those who want to join the conversation.