Ginger Tea After Shouting at the Pipes

Sunday nights, I often meet friends out for beers and tequila. Not last night.

Last night, as my friends gamely tried to have as enjoyable a time as they could manage without me (this is how I imagine it goes when I'm not around), I was curled on my bathroom floor, sweating, shivering, too weak even to reach for the phone. "Come," I wanted to plead. "Bring me water." I had an inexplicable, insatiable craving for butterscotch candies. My febrile hallucinations were occasionally interrupted with bouts of roaring at the porcelain. Afterwards, the cool tile floor felt so, so good. 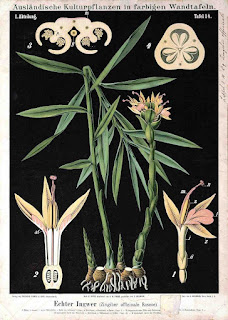 Though we didn't have butterscotch candies, I got water and, after a while, ginger tea. We call the stuff ginger tea, but the hot drink is more properly a decoction. That is, it's a highly seasoned liquid that's been flavored by long, low cooking of plant matter in water. See? It's kinda like tea. Calling it a decoction around the house, though, is like calling a possum an opossum; technically correct, but a bit contrived.

Ginger has long been regarded as soothing to upset stomachs. You may recognize it from that ginger pie I sometimes bake. I break out this decoc...this tea now and then to combat queasiness. Even if the effect is a placebo, sipping this hot, bracing tea helps me feel just a little better. But I tell you this: when I'm wrapped in a towel to ward off chills and my clammy, sweaty head is pressed against the cool toilet like it's dispensing God's own heavenly grace, a little better makes a world of difference.


Ginger Tea for an Upset Stomach

The proportions here are to taste, but the end result should smell and taste strongly of ginger. I like a bit of honey to round out taste and to soothe my throat, but leave it out if you got some beef against honey.

Wash but do not peel the ginger. Slice into fat coins or ovals. Put them in a nonreactive pot big enough to hold around 1.5 quarts. Pour the water over it. Bring to a boil, then reduce the heat and simmer for about 20 minutes. Strain some into a glass or mug, sweeten with honey to taste, and return the pot to a low flame.

Top off with fresh water now and then as you strain off more to drink until the ginger loses its potency or you just get sick of the stuff.

I haven't tried this next bit, but it stands to reason that when you're done with the drink and there's some left in the pot, you could strain off the solids and add twice the volume of sugar as tan ginger water is left. Heat just until the sugar dissolves and you've got yourself a nice ginger syrup for cocktails or drenching cakes or whatever.

Now, if you'll excuse me, I still feel wrecked, like I've been mauled by a cougar or fell off a speeding truck. I'm off for some Ibuprofen and tea.
Posted by Matthew Rowley at 3:32 PM