In the summer of 2004, I threw a small get-together in Birmingham, Alabama. I was on the board of the Southern Foodways Alliance then, a group dedicated, in a nutshell, to celebrating the food and drink of the changing American South and the people who made it. Maybe a hundred of us were there for a small conference. After two long bus rides that day, the group was beat, so I invited a handful to come up to my hotel suite for restorative drinks and food once they'd recovered from the sun, the bourbon, and the rides. 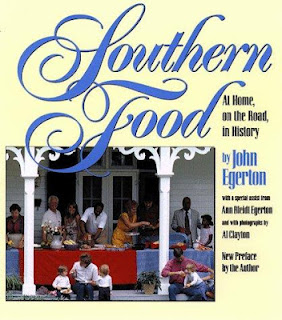 One of those was historian John Egerton.

A few restaurateurs showed up. Several editors from papers, magazines, and broadcast news were there. Bartenders and writers rounded out the group. A half-dozen different conversations rose and fell until one voice—one kindly, avuncular voice—dominated the room: Egerton's.

Egerton is a charmer with a ready smile and (almost) always a kind word to say. He so mesmerized this group of experts with his tales that they soon gathered around him in a loose semicircle on the floor and spilled onto beds and chairs, absorbing warmth from the Promethean fire of his insight and wisdom.

John Egerton is a central figure in the modern history of Southern food and the man can tell a story like nobody else. He was one of the architects of what became the Southern Foodways Alliance around the turn of the millennium. His 1987 opus Southern Food has never been out of print and it remains the only book of which I own two copies — one for the shelf in the library and a reading copy for the kitchen, a copy I don't mind getting splattered or dogeared. I buy secondhand copies when I come across them to give to friends. Though it has recipes — and plenty of them — the 400-page book is as much travelogue and history as it is a cookbook.

This morning, I learned I'm not the only one who acts as a nano Southern Food distributor. In The Oxford American, Rien Fertel reflects on the 25th anniversary of the book's publication and how, as a post-Katrina New Orleanian, it held special resonance. He writes:


His thesis stung hard. It resonated in that place that wished this physical and emotional inundation that accompanied Hurricane Katrina was all a very bad dream. The South’s “past now belongs to myth and memory,” he wrote, while its food endured despite the intrusion of that decade’s new American cuisine and its “sin of subtraction.” Modern cookbooks removed fat, salt, and sugar from recipes—cooking no longer took time. Egerton highlighted the endangered species, those Southern foods struggling to survive: country ham and crawfish bisque, Brunswick stew and slow-cooked pit barbecue. The region’s diverse culinary cultures, like my flooded city, required defenders and preservationists.

Read the rest of Fertel's essay here. And if you should relocate to New Orleans and run into Mr. Fertel, he may just set you up with your own copy of Southern Food. Maybe you could trade some whiskey or barbecue...

In his essay, Fertel laments only a single chapter in Egerton's book on New Orleans. If you, too, want more on that city, see these two:

Posted by Matthew Rowley at 9:58 AM