Why So Spunky, Punky Monkey?

We get into cyclical ruts around the Whiskey Forge — watching a month’s worth of Tosh.0 in one sitting, for instance, reading everything a particular author published, or tucking into the glazed pork belly time and time again from our favorite neighborhood joint, Carnitas’ Snack Shack.

And drinks? Ah, man. There, too. We make a drink we like and that’s it. That’s what we drink. We got so stuck on Kentucky mules last year that I can barely stomach the thought of one more. Gallons, literally, of Buffalo Trace bourbon went down our throats on that one cocktail. Anyone who came over was offered a bourbon-and-ginger-beer combo. That’s not to say I’m sick of bourbon, that I grew weary of the bitters in it, or that the mule is a bad drink. Far from it. I just wanted a break from the monotony of it. 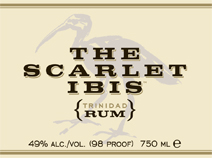 Enter the Punky Monkey, created by Joaquin Simo of New York’s Death & Company, to shake me out of our cocktail doldrums. Jeff Berry laid out the drink in his Beachbum Berry Remixed. At the bar, Berry reports that it’s on the menu as the Kerala. Regardless of the name, it’s a great little cocktail that relies on not just bourbon, but — in an uncommon and, in some quarters, controversial move — bourbon and rum in the same glass.

The rum is The Scarlet Ibis, a 98 proof blend of Trinidadian rums made specifically for Death & Company. Imported by Eric Seed of Haus Alpenz, The Scarlet Ibis is available commercially, though in limited quantities. In a pinch, Berry suggests, one could substitute either Sea Wynde or Santa Teresa 1796. When I cranked out a round of apricot-colored Punky Monkeys last night, I had no Buffalo Trace on hand, so mixed equal parts Wild Turkey 101 and Bulleit bourbons. What the hell: I was already putting blended rum in the glass, why not blended whiskey?

Purists be damned, this was a delicious drink.

Lightly muddle the cardamom pods. Add all other ingredients, then shake well with ice cubes. Strain through a fine-mesh wire sieve into a champagne coupe.

Note: If you scale up, go easy on the cardamom. A little goes a long way, so if, say, you quadruple the recipe, maybe only double the spice.

this is the second cocktail TODAY that i've come across using cardamom pods. is this a new trend? seems too much to be pure serendipity to me. either way, this sounds great. i feel compelled....

Whats the other drink, FrankO?

I wouldn't say that cardamom in drinks is a new trend, exactly (it's a prominent flavor in chai, for instance, popular for the better part of a decade in the US and it is present in various cocktail bitters), but it is part of a larger trend of deploying spices and herbs in cocktails that's very much a part of modern bartending.

Put another way: most bars you walk into definitely will NOT have cardamom on the drinks menu — but don't be gobsmacked if some do.

I like cardamom and have used it in baking for years. In fact, I keep a small jar of sugar and ground cardamom in the pantry for dusting on some baking goods. A few years ago, I was making sidecars when my eyes landed on the jar. Ta da. Cardamom-rimmed sidecars.

here's the other one: Cardamom & Mint Cocktail, at the Serious Eats blog: http://tinyurl.com/78sdl7u

i've used cardamom for ages in indian cooking and baking, sure, but for some reason i saw it 2x today in cocktails, so i thought it may be a new trend. i also happen to have a lot of it right now (shopping at indian markets for the win!), so i'm always looking for new ways to use it up. : )

So spill, FrankO; how did you use the cardamom?