Just Some Ice Cubes, My Good Man — White Whiskey at the '21' Club

Next week, I'll be in Northern California and, come July, be back in New Orleans for a talk on brandy with Paul Clarke at Tales of the Cocktail. But between NorCal and NOLA, there's New York City, where I haven't stepped foot in years. Of course, there won't be time to do even a quarter of what I'd like, but that's the way these things go. 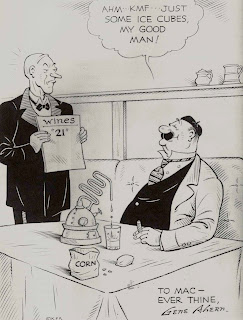 I am, however, already pulling together a punch list for where to drink, where to eat, and of the distillers, bartenders, chefs, and cheesemongers with whom I want to reconnect. In all likelihood, I won't eat at '21' Club, but I did pull The '21' Cookbook from the shelf when I recalled that bar book collector Brian Rea used to work there.

Flipping through the drinks section (so nice to find drinks in their proper place at the front of a book rather than tacked on, as if in disgrace, at the end), I found an old Gene Ahern illustration. Ahern was a 20th century cartoonist whose comics at times took bizarre turns (Robert Crumb, among others, took inspiration from his work). In this undated panel, Ahern pays tribute to Mac — presumably Colonel Maxwell "Mac" Kriendler — with a little spot of unaged tabletop corn whiskey.

Unaged? Shoot, it's practically instant. Sure, the illustration is tongue-in-cheek, but who would've guessed, mid-century, that raw whiskey would one day earn enough of a mantle of respect that fancy bars across the country would carry "legal" moonshine without the slightest hint of irony?

Posted by Matthew Rowley at 7:14 PM