Every time we go to the supermarket,
an increasing number of items
are oven-ready or ready-to-eat:
cheese is grated, mushrooms sliced,
fruit segmented — I swear, if they sold toast
we’d buy it.


~ Darina Allen
A few years ago, I found myself at the home of San Francisco cocktail writer and sometimes bartender, Erik Ellestad. A number of liquor writers had descended on the Bay Area, some to cover meetings of the American Distilling Institute, some just to eat and imbibe. While the rest of us mixed drinks, Pennsylvania blogger Rick Stutz made butter.

Yes, he made butter. 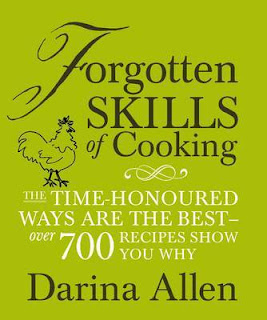 This is both as mundane and amazing as it sounds. Mundane because, well, butter is ubiquitous in America: even if you don’t eat it, you know where to get some. Amazing because almost nobody actually makes the stuff at home. I recognized instantly what Stutz was doing when I heard the mixer beating cream way too long. I was irked with myself because, as simple, straightforward, and easy as is it to make butter at home, it hadn’t even occurred to me as an option — and I’d grown up in a house with a butter churn.

Darina Allen found that over half of the students at her cookery school in Ireland had likewise forgotten how to make butter. Her epiphany came when one who had overwhipped her cream was on the verge of throwing it out. Allen stopped her and took the opportunity to teach the class how to make butter from the failed whipped cream. The students hadn’t necessarily forgotten what they had already known; rather, as a society, the Irish had lost kitchen skills that their grandmothers had known.

Allen set about correcting that alarming loss that by hosting a series of “forgotten skills” classes at her heralded Ballymaloe Cookery School. Courses included “How to Keep a Few Chickens in the Garden,” “How to Cure a Pig in a Day,” “How to Build a Smoker and Smoke your own Food,” and others on foraging, gardening, dairy, and other topics that spoke to eating what one grew. In her love for game, stillroom crafts, animal husbandry, and making the most of every scrap, she’s a bit like Hugh Fearnley-Whittingstall (with good hair). She still teaches at Ballymaloe and, if you’re so inclined, you can sign up for classes. Most are under €150.

If, however, you cannot quite make it to County Cork — where my mother’s family is from — you are in luck. Mrs. Allen has spun her courses into a book: Forgotten Skills of Cooking. With 700 recipes in 600 pages (and weighing in at just under 5 pounds), it’s one of those books that might — just might — stand in as the sole cookbook for those who want only one. For those drawn by the rustic allure of modern urban homesteading, that goes double.

If you’ve ever thought you’d like to cure your own hams or make marmalade rather than buy it, do yourself a favor and check out the book. A casual flipping of the pages is enough to tell you that an Irish hand is at the stove. You will find recipes for soda bread, salmon, periwinkles, spiced beef, crubeens (i.e., pig’s feet), Irish stew, champ, and colcannon. Overall, though, the recipes strike a balance between hominess and worldly sophistication. You’ll find Moroccan takes on lamb, numerous Italian and French recipes, smoked eggs, duck rillettes, How to Make Crackling, applesauce, sweetbreads, hand-cut potato chips, paneer, porter cake, etc.

There are instructions for raising chickens (“Everyone knows how passionate I am about keeping hens”) and hanging game with extensive notes on preserving and vegetables. The tone that comes across more clearly, regardless of the topic at hand, is one of experience and encouragement, telling us, frankly, that some kinds of forgetting are warranted.

What kind? Undoubtedly, it’s the inner voice that tells us, when we see a looming expiration date, automatically to throw out that carton of yogurt or that when we see three moldy berries in a box, it tells us to bin the whole thing rather than discard the fuzzy bits and make a little pot of jam. That’s the voice to forget. Rather, use your own senses to tell when something’s bad or off. Bad berries are bad berries and if they can’t be used, then so be it, but a date of expiry can’t possibly be one’s only guide.

When you understand that electricity came to Mrs. Allen’s home village only when she was only 9 years old, the inherent thriftiness of her approach makes sense. When you’ve lived through the last three years of economic turmoil, you realize her timing could not have been better.

Forgotten Skills of Cooking is a tome I’m glad to have. It jogs my memory of foods and preparations I’ve already forgotten and explains how the old ways once again have become new.

Thank you, Mrs. Allen, for reminding me that I did indeed grow up in a house with a butter churn. I hope you don’t mind if I use my KitchenAid mixer, though, when making my next batch of the yellow stuff.

Note: for the following recipe from Forgotten Skills of Cooking, butter bats (or, as my mother calls them, butter hands) are small wooden paddles used to handle to form fresh butter into manageable cubes, logs, lumps, and balls. They are grooved on one side to allow liquid to stream away and use minimal surface area to shape the butter.

Soak the wooden butter bats or hands in iced water for about 30 minutes so they do not stick to the butter.

Pour the heavy cream into a cold, sterilized mixing bowl. If it’s homogenized, it will still whip, but not as well. If you’re using raw cream and want a mor traditional taste, leave ut to ripen in a cool place, where the temperature is about 46F, for up to 48 hours.

Beat the cream at medium speed in a food mixer until it is thick. First, it will be softly whipped, the stiffly whipped. Continue until the whipped cream collapses and separates into butterfat globules. The buttermilk will separate from the butter and slosh around the bowl.

Tip the mixture into a cold, spotlessly clean sieve and drain well. The butter remains in the sieve while the buttermilk drains into a bowl. The buttermilk can be used to make soda bread or as a thirst-quenching drink (it will not taste sour). Put the butter back into a clean bowl and beat for another 30 seconds to 1 minute to expel more buttermilk. Remove and drain as before.

Drain the water, and wash twice more, until the water is completely clear. 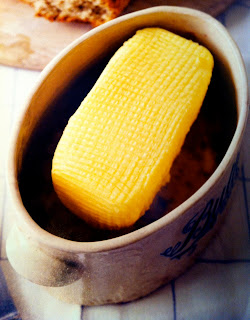 Recipe note: If you prefer salted butter, add ¼ tsp of pickling salt — also called “canning and pickling salt” — for every 4oz of butter before shaping it.

Photo note: Other than the cover image of the book, each of the images here are photos by Peter Cassidy and can be found in Forgotten Skills of Cooking.

Posted by Matthew Rowley at 6:13 PM

Wow. That book was on the list of books to get this year. It just shot to the top.

It doesn't disappoint. I don't know that it will gain the popularity that "The New Basics" did, but it certainly deserves to.