For some unknown reason corned beef does not receive the careful display it should get. Too many meat men merely toss the corned beef into a platter any old way. It should be remembered that corned beef is a big trade puller for people who will go miles out of their way to patronize a meat market that is known for good corned beef.
~ Albert Todoroff (1949)
Store Tested Ideas for Meat Men
Inspired by (a) St. Patrick's Day (b) Darina Allen's book and (c) the repugnant pink sludge enrobing vacuum-packed corned beef that started showing up on store shelves several weeks ago, I made corned beef this week. That's not to say that I merely cooked a piece of it — I sourced a fresh beef brisket, washed it, trimmed it, slipped it in cold spiced brine and let that mother sit in there for almost a week. The result was a rosy pink hunk of beef that was the centerpiece of a simple dinner last night: corned beef brisket, boiled fingerling potatoes, and — since I don't care for plain boiled cabbage — coleslaw. On the side: a pot of homemade mustard made with Filipino vinegar. 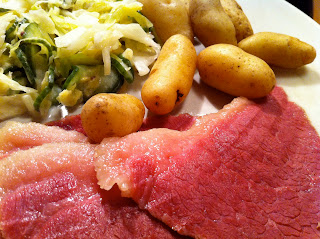 Simple, tasty, the precursor to both sandwiches and homemade beef hash. The following recipes may seem like a lot of work; they're not. They are super simple, just heavy on the words to describe it for anyone who's never tried making corned beef before.

Wash and pat dry the brisket. Gently place it in a pot large enough to accommodate the piece in one hunk. Carefully pour the chilled brine over it to cover. Weigh it down, if necessary, with a ceramic plate or bowl. Alternately, carefully slip the brisket into the brine if it's already in an appropriate container. Refrigerate for five days, checking now and then to make sure it remains submerged. After 2 or 3 days, turn the beef over (overhaul it) and continue brining. 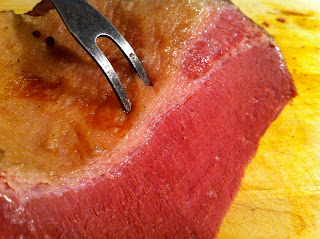 After five days, remove the (now shrunken and somewhat darkened) beef from the brine, rinse it, and place in a large pot or dutch oven with fresh water to cover. Add a small handful (say, somewhere between an eighth and a quarter of a cup) of pickling spices, bring to a boil, then reduce to a simmer. Cover and simmer 3-4 hours until done.

Remove from the liquid and rest 15-20 minutes before slicing. Alternately, allow to cool completely before slicing for sandwiches or cutting thicker bits for hash.

Bring all the ingredients to a boil, stirring until the salts and sugars are dissolved. Turn the heat off, let it cool, then refrigerate before using — you don't to start cooking the beef in a hot brine.

For every cup of the above mix, add a small handful of crumbled dry bay leaves (not fresh ones) and 2 or 3 4" sticks of Mexican canela, roughly crushed into large pieces. If you prefer to use the firmer, darker cinnamon sticks, use only 2. What you don't use for the brine and cooking the beef, you can use later for homemade cucumber pickles.
Posted by Matthew Rowley at 1:17 PM